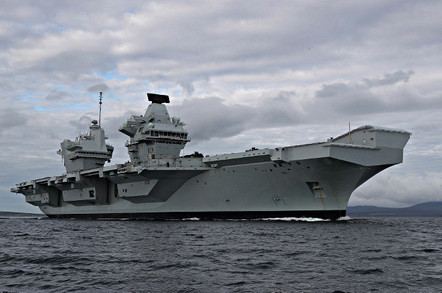 HMS Queen Elizabeth is still on track to deploy to the Far East in 2021 – although whether it will actually sail through the South China Sea is yet to be explicitly confirmed – with escorting warships from the US and the Netherlands, according to reports.

On her maiden operational deployment, the carrier will take around 24 F-35B fighter jets plus helicopters. Thanks to the small size of the Royal Navy and the high value of the carrier, it is unlikely Queen Elizabeth or sister ship Prince of Wales will ever deploy without being part of a multinational naval coalition.

Nonetheless, defence secretary Ben Wallace was quoted by the publication as saying: "It is definitely our intention, though, that the carrier strike group will be able to be a wholly UK sovereign deployable group. Now, it is probably not necessary to do that every single time we do it, depending on the tasking, but we want to do that and test doing it. Once we have done that, depending on the deployment, of course, we will cut our cloth as required."

Although the initial plan was for Britain's biggest ever warship to sail through the South China Sea, which China claims as its own territory in defiance of international laws and norms, and despite claims from at least six other countries including Vietnam and the Philippines, this detail was noticeably absent from the UKDJ report.

Over 200 islands, also subject to disputes between China, Taiwan, Vietnam, Malaysia, and the Philippines, also lie in the area, which stretches across 3.5 million square kilometres and is visited by one-third of the world's shipping traffic.

A US presence on the South China Sea deployment will be a useful political tool for the administration as a show of strength to China as well as asserting the right to freedom of navigation in the sea. In addition, it reinforces the idea that the UK supports US foreign policy – Queen Elizabeth is effectively replacing a US carrier on her Far Eastern tour as part of the superpower's standing naval presence.

Of the jets aboard QE, around half will be supplied by the US Marine Corps, as has been reported for years.

The Dutch Navy will definitely join the deployment, most likely with a De Zeven Provinciën-class frigate – replacing one of the British Type 23 frigates in the mooted carrier battle group. Similarly, UKDJ reckons that an American destroyer will join the 2021 deployment (named Carrier Strike Group 21), freeing up a British Type 45 destroyer.

In British naval parlance, frigates are used mainly for fighting enemy submarines and surface warships while destroyers mostly specialise in anti-aircraft warfare. The nuclear submarine is largely useful for helping detect enemy submarines and cueing in the carrier's anti-submarine helicopters to drop sonar buoys and launch torpedoes at it.

Last year HMS Sutherland sailed through the South China Sea in a dry run for the carrier battle group. ®