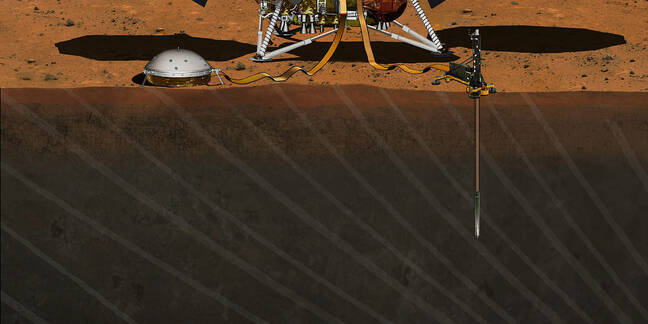 The heat probe aboard NASA’s InSight lander is having trouble digging into the surface of Mars due to “unusual soil conditions,” the space agency announced on Sunday.

Designed to burrow up to five meters below Martian ground, the device, affectionately named “the mole”, has only managed to descend 35 centimeters since it began hammering away in February. As it pounded away, half of the probe unexpectedly popped out of the ground over the weekend.

Mars continues to surprise us. While digging this weekend the mole backed about halfway out of the ground. Preliminary assessment points to unexpected soil properties as the main reason. Team looking at next steps. #SaveTheMole #Teamwork pic.twitter.com/UURvU8VTwZ

Now, a NASA statement has pinned the mole’s struggle on the soil conditions. “Preliminary assessments point to unusual soil conditions on the Red Planet,” the space agency said. “The international mission team is developing the next steps to get it buried again.”

The red soil is tougher than expected. Since the mole can only dig when there is friction from the surrounding soil as it moves, lack of friction means the recoil from its self-hammering motion will just cause the probe to bounce up and down in the same place without digging further.

As the device struggled for months, NASA engineers decided to employ a scoop on the end of Insight's robotic arm to pin the mole against the wall of the hole, giving the friction needed to dig. This led to a very slight improvement; it managed to probe nearly two centimeters of ground over the past week before it popped out again, destroying its progress.

The mole has gone back to burrowing itself in a hole, but if it continues to struggle inserting itself into the Martian soil NASA will consider pushing soil into the hole to create friction so that it can dig. The mole has dug about 220 times over three occasions; each time it has managed to sink a little further into the ground.

It’s unclear if it will ever reach the five meter goal. “It will take more time - and hammering - for the team to see how far the mole can go,” said NASA.

The probe is part of a larger apparatus known as the Heat Flow and Physical Properties Package, or HP3 for short. The equipment studies the internal temperature and heat flow of the Red Planet to understand how it formed. HP3 works alongside the Insight Lander’s seismometer - the Seismic Experiment for Interior Structure (SEIS) - an instrument that detects marsquakes.

"The mole still has a way to go, but we're all thrilled to see it digging again," said Troy Hudson of an engineer and scientist working to save the mole. "When we first encountered this problem, it was crushing. But I thought, 'Maybe there's a chance; let's keep pressing on.' And right now, I'm feeling giddy." ®