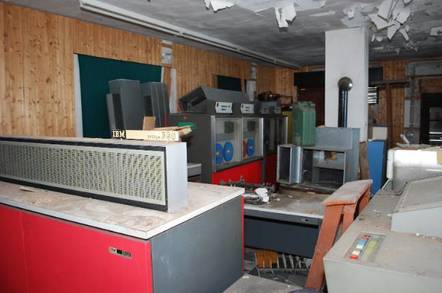 Plans to restore an aged IBM mainframe found in a disused building in Germany are on hold because of struggles to find a way to haul the hardware to the UK.

Brexit worries seem to have put the frighteners on haulier companies and the team behind the project are turning to German firms to transport the gear westwards.

The scheme to buy the IBM 360 was hatched in a pub earlier this summer. A bit of internet bidding later and Adam Bradley and Chris Blackburn were the proud owners of an IBM 360/20 and a 370 model 125 from the 1980s and assorted peripherals including a punched card reader. The plan was to hoik the hardware back to Britain and begin the arduous business of restoring it all to its former glory.

It seems it's difficult to send a UK truck into Germany but not a German one to the UK for some reason...

Bradley told The Reg he'd assumed getting the massive machine out of the building would be the difficult bit of the scheme. Each machine weighs about 600kg and exiting required negotiating three steps. There was also an extremely hard deadline – the building was due to be demolished.

But frenzied trips to Nuremberg and the help of several other people saw everything removed before the roof came down. Everything was safely stashed in a local lock-up.

The team has also already raised the £5,000 to pay for the trip back to the UK.

Bradley said: "We've tried quite a few hauliers. We've got a couple more options to explore but it's also a time issue as it's surprisingly time-consuming to contact each one and go through the requirements."

Our intrepid big iron rescuer is also holding down an actual job while pursuing the project.

We need a full articulated lorry with a hard sided trailer and a tail lift rated to at least 900kg. It'll also need lots of internal tie-down points, and lots of ratchet straps (and preferably moving blankets). The storage in Germany is good, but quite expensive and, yes, we're paying out of pocket for that. We've still got the donation money to move it, awaiting a suitable haulier. I'm hoping now with some further Brexit delays we may have some more luck finding a haulier. I've taken to trying to find a German one now as it seems it's difficult to send a UK truck into Germany but not a German one to the UK for some reason.

The hope is to get everything back to Britain before the ever-shifting Brexit deadline because of worries about what the import requirements on ancient computing kit might in the event of a no-deal departure.

Any Reg readers with a suitable vehicle are invited to get in touch via the team's blog. The team is also being helped by Peter Vaughan, a volunteer at the National Museum of Computing. ®