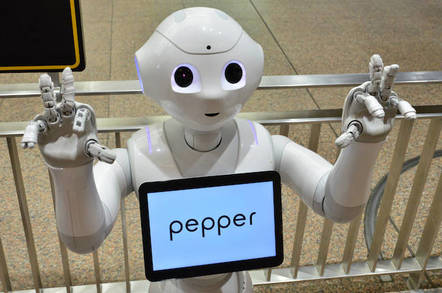 Rise of the Machines A nightmarish vision of our future dotage awaits: government-built "care robots".

The potential was outlined as part of a £34m investment in research on autonomous systems, announced by the UK's Department for Business, Energy and Industrial Strategy (BEIS) today.

With one in seven Brits now expected to be over 75 by 2040, it is hoped the plans will alleviate the strain on the adult social care sector.

BEIS wants to develop robots to do tasks such as helping an elderly person up after a fall and raising the alarm, delivering food at mealtimes, and even ensuring they take their medication.

The research programme hopes to make robots better protected against cyber-attacks and that they demonstrate principles like respect, fairness and equality, enabling them to eventually be used in environments like care homes and hospitals.

Science minister Chris Skidmore said: "It's vital that we meet the needs of this ageing society, and through cutting edge research like this we will ensure that as technology advances, the UK leads the way in designing and adopting it, growing our status as a global science superpower."

The announcement follows previous government investment in a Bristol-based project that has already developed a prototype robot called CHIRON, designed to support older people with mobility and other age-related impairments.

The robot could eventually assist with anything from bringing a tray of food or drink to a patient, to helping those with mobility issues out of their chair. The latest phase of Bristol Robotics Laboratory's project is conducting research to ensure that these robots are trustworthy and safe for use, said BEIS.

Existing care robots include PARO, developed by Japanese company AIST, which replicates animal therapy for patients in hospitals and care homes. There's also Pepper, a humanoid robot developed by SoftBank Robotics able to recognise faces and basic human emotions that could be used in preventive care - if it can iron out a few security issues.

Speaking of which, Japanese hotel chain HIS Group recently had to apologise for ignoring warnings that its in-room robots were hackable to allow pervs, or just bored security researchers, to remotely view video footage from the devices.

Praminda Caleb-Solly, professor of assistive robotics at Bristol Robotics Laboratory, said the programme will look at developing reliable autonomous systems across all sectors – from automated personal shoppers to robots that select the best mortgages – and would involve researchers, experts, and the general public so that their needs are understood.

"Ethical and legal considerations will be incorporated when developing autonomous systems, so that new advances will be more resilient to cyber-attacks and be as safe as possible for consumers," she said.

"Assistive robots can provide essential support for those who need help carrying out everyday tasks – so they can maintain their independence for as long as possible. But making sure we can trust these robots by reducing the risks associated with this technology is essential."

That said, given the government's track record on things like Brexit, Crossrail and, er, pretty much any major IT programme, one might be forgiven for being less than enthusiastic about this latest idea... ®