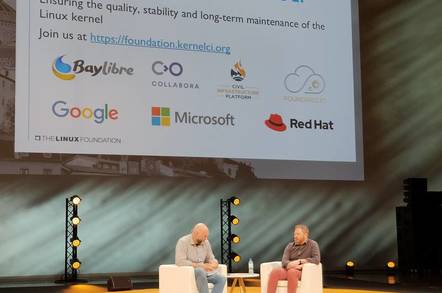 "We have six or seven projects which are doing kernel testing, so much so that we're getting really annoyed," kernel maintainer Greg Kroah-Hartman told a crowd today.

"We came together [at the Linux Plumber's conference] and said pick one. We agreed on this one."

The chosen one is KernelCI, which has now become a Linux Foundation project, and the recipient of funding from companies including Google, Microsoft and Red Hat.

Its new status was revealed at the Open Source Summit under way in Lyon, France, and it's a significant move, according to Kroah-Hartman.

KernelCI had previously been supported by BayLibre and Collabora, but those two companies are now joined by Google, Microsoft, Red Hat, Civil Infrastructure Platform and Foundries.io.

What is KernelCI? "It is a project for testing the kernel," co-founder Kevin Hilman told the Summit crowd. "It started six or seven years ago among a few kernel maintainers that were recognising that Linux runs on so many pieces of hardware, but the testing on that hardware is very minimal. That's how it began: just collecting a bunch of hardware and running on as much of this hardware as possible.

Companies have been too secretive about testing

"We have open-source software for the kernel but we haven't taken an open-source approach to our testing efforts. KernelCI wants to collect that and share our testing software just like we're sharing the rest of our code."

Kroah-Hartman said companies have been too secretive with their testing. "People weren't opening their test infrastructure. So we'd get a bug and maintainers couldn't duplicate it."

Bugs in the kernel are not fixed quickly enough. "We're finding bugs way faster than we can actually fix them," said Hilman. "So we need not only to do better testing but do better tracking and fixing."

Joining the Linux Foundation brings with it formal governance for the project, which, according to Hilman, will help companies to share their testing efforts. "Having this Linux Foundation project is having a place where we can start collaborating on that stuff. Most people are doing the same thing; there's a lot of stuff we can collaborate on.

"Several of these projects have been running tests for years. We've got a lot of data on historical testing that we could be mining."

The project will also be helpful for companies shipping Linux-based products. A kernel-testing infrastructure means "that they can look and say, 'OK: we're going to move to the next kernel'."

There will be a database of kernels and the tests they have been running.

The KernelCI testing platform is open source on Github. This means that hardware companies can run it internally while their hardware is being developed.

Once hardware is released, the project's hope is that companies will drop their secretive habits and be willing to share their test data. ®