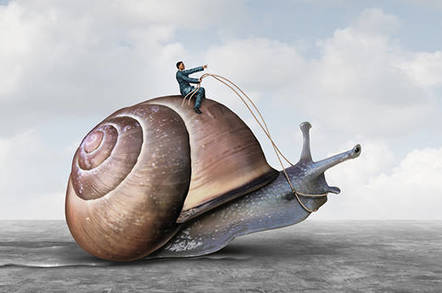 A first and limited look into the UK rollout of 5G has revealed punters enjoying median speeds up to four times faster than standard 4G, with EE coming out on top and Vodafone managing to be just twice as fast.

The tests were conducted by RootMetrics in Birmingham between August and September 2019, prior to O2 and Three's 5G launch – meaning it only shows the performance from two mobile operators.

The research, however, provides an early indication of speeds and availability of the much-hyped technology - and reveals the disparity with connectivity enjoyed in far flung places, including the US.

The team ran 8,883 tests to paint a comprehensive picture of how consumers and businesses experience 5G in Birmingham. Tests were performed using the OnePlus 7 Pro 5G (EE) and Xiaomi Mi Mix 3 5G (Vodafone), both of which were bought in store.

"To put those speeds into context, downloading a favourite movie on Netflix (file size: 600MB) would take 26.6 seconds on EE's 5G compared to 102.1 seconds on EE's non-5G mode," the report stated.

Meanwhile, EE's 5G availability rate was 51.6 per cent and Vodafone's 10.8 per cent. Peak download speeds were recorded at a maximum of 450.9Mbps on EE and 366.9Mbps on Vodafone.

"Although these speeds were incredibly fast and far exceed current non-5G mode performance, Birmingham's maximum speeds did trail the fastest maximum download speeds that RootMetrics recorded in the USA (Verizon at 1.1 Gbps in Chicago) and South Korea (LG U+ at 902.7Mbps in Seoul).

"While 5G in Birmingham is already fast and clearly filled will promise, this again suggests that networks in the UK still need time to mature and develop before users reap the full benefits of 5G."

UK regulator Ofcom also confirmed today it would go ahead with the auction of the 700MHz and 3.6-3.8GHz radio spectrum bands in the spring of 2020 to boost new 5G networks to potentially gigabit-capable mobile broadband speeds.

The latter (3.6-3.8GHz) is part of the primary band for 5G and is "capable of carrying lots of data-hungry connections in concentrated areas", the regulator said.

As expected, the coverage obligations have been taken out of the proposals after the UK's mobile operators pledged to stump up half the cash for a £1bn "Shared Rural Network" to tackle 4G notspots last week. ®