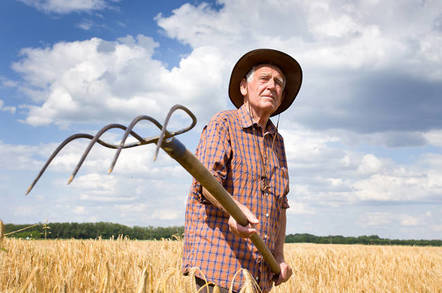 The UK's mobile operators have pledged to stump up half the cash for a £1bn "Shared Rural Network" (SRN) to tackle 4G notspots.

All four – EE, Three, O2 and Vodafone – have signed proposals to bring rural coverage to 95 per cent of the UK by 2025 via £530m in industry funding, with the government committing to tossing in a further £500m.

According to Ofcom, current geographic 4G mobile coverage – meaning where a signal is available from all four providers – stands at 66 per cent.

Under the SRN link up, EE, O2, Three and Vodafone will invest in a network of new and existing phone masts that all four would share.

That would lead to additional mobile coverage for 280,000 premises and 16,000km of roads, while consumers would be able to rely on their own provider's network to use their mobile phones wherever they are.

Digital secretary Nicky Morgan said: "Brokering an agreement for mast-sharing between networks alongside new investment in mobile infrastructure will mean people get good 4G signal no matter where they are or which provider they're with.

"But it is not yet a done deal and I want to see industry move quickly so we can reach a final agreement early next year."

Government-owned mobile infrastructure built as part of the Emergency Services Network will also be made available to all four operators. This is expected to contribute to the coverage target by delivering up to an additional 2 per cent of geographic coverage per operator, in some of the most remote areas.

Want a discount at the spectrum auction? Let's talk...

Under the plans, Ofcom has also said it will scrap coverage obligations from the next spectrum auction, the regulator's historic way of increasing coverage in unprofitable areas.

The comms watchdog had proposed including two coverage obligations in the auction that would require the two operators who acquire them to reach 90 per cent coverage by 2024, in exchange for a discount in the auction.

The SRN proposal, on the other hand, would mean each individual operator would reach 92 per cent coverage by 2025, with licence obligations taking effect in 2026. The collective effect of this would be coverage of 95 per cent of the UK, or so the Department for Digital, Culture, Media and Sport claims.

A spokesman for the watchdog said: "We warmly welcome these commitments, which follow detailed discussions between government, Ofcom and the mobile operators. These improvements will make a real difference to mobile customers across the UK, and we'll ensure they're legally binding by writing them into operators' licences. We will also monitor and report on companies' progress in achieving better coverage.

"Separately, we will shortly set out revised plans to release more airwaves for mobile services next year. In light of today's agreement, we are no longer proposing to include coverage requirements in our auction process. We will now press ahead, with industry, on the urgent task of getting better mobile services to people wherever they are." ®