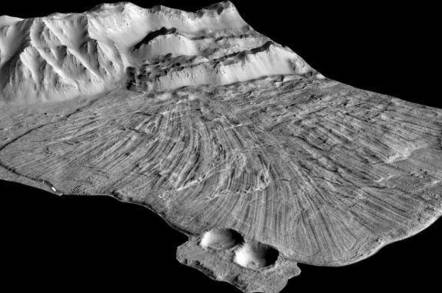 The mountains and ridges on Mars – which some believe are carved from melting ice – can also be formed by landslides, according to a paper published in Nature Communications on Thursday.

Scientists, led by the eggheads at University College London in England, have effectively cast doubt over previous studies that support the idea that melting ice may be sculpting the Red Planet. The long winding slopes down its peaks show that material has shifted over time. Similar patterns have been observed on Earth, caused by our world's melting glaciers, leading some academics to believe that there may be ice lurking close to the Martian surface, which melts and flows downhill, leaving channels in its wake.

This latest study reveals that belief may not be the case. The boffins analysed images of the Martian surface taken by NASA’s Mars Reconnaissance Orbiter to estimate the average spacing between the ridges and the average thickness of the material deposits, so that they could study how the ridges are formed.

The ratio of between the spacing and thickness was similar to those seen in fluid dynamics experiments, where grains of sand falling down inclines also create sharp-edged ridges. It’s possible that a similar process unfolded on Mars.

The team calculated how fast the debris would have to flow in order to create the channels seen in the Mars images. Landslides from layers of loose fragmented rocks sliding down the mountains at speeds of up to 360 kilometers per hour could have carved the ridges, they realized.

“While we aren’t ruling out the presence of ice, we know is that ice wasn’t needed to form the long run-outs we analysed on Mars,” said Tom Mitchell, co-author of the paper and an associate professor of earthquake geology and rock physics at University College London.

“The vibrations of rock particles initiate a convection process that caused upper denser and heavier layers of rock to fall and lighter rocks to rise, similar to what happens in your home where warmed less dense air rises above the radiator," Mitchell said. "This mechanism drove the flow of deposits up to 40 km away from the mountain source and at phenomenally high speeds.” ®

'Water on Mars' re-classified as just 'sand on Mars'