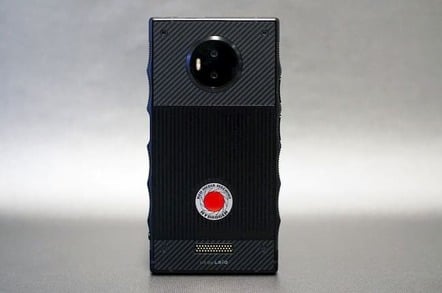 Iconic camera company Red has upped sticks and quit the smartphone biz following the retirement of its founder Jim Jannard and mobe-fondlers' dismal reception of the firm's first effort, the Hydrogen One.

In a statement issued on the Red community forums, Jannard explained the reasons for his stepping down.

I have spent the past 45 years building "inventions wrapped in art".

Just now turning 70 and having a few health issues, it is now time for me to retire.

I will be shutting down the Hydrogen project, ending a career that has included Oakley, Red Digital Cinema and Hydrogen. I am very proud to have worked with many great people over the years who have signed on to the vision.

Red Digital Cinema will continue stronger than ever with Jarred [Land, current president], Tommy [Rios, exec veep] and Jamin [Jannard, marketing president] at the controls. Komodo is about to be launched… and the Hydrogen One will continue to be supported in the future.

Why the first phone was the last

It's perfectly reasonable to think Jannard discontinued the Hydrogen project because he wanted to leave Red as a slimmer, more streamlined company that focuses on its core competencies of cinema-grade digital cameras. But that ignores a fundamental problem: namely that by anyone's yardstick, the Hydrogen One was an utterly terrible phone.

Terrible, but also ambitious. It was that ambition that ultimately became its undoing.

Its so-called "holographic" screen, which simply added depth to 3D content, underwhelmed reviewers, with The Verge comparing it unfavourably to the Nintendo 3DS. Moreover, it lacked compatible content at launch, making this feature little more than a high-tech white elephant.

Another feature hyped by Red was the Hydrogen One's expansion pins, which users were supposed to use to attach accessories. During the early PR days for the phone, Red was eager to hype its compatible 8K camera sensor, which would allow the user to shoot cinema-quality footage from their phone.

Unfortunately, at launch, this wasn't available. Neither were any other accessories.

To date, Red has failed to release any accessories for the Hydrogen One. And earlier this year, the firm scrubbed any mention of accessories from its website, leaving the few who actually bought one of these phones feeling like the victim of a bait-and-switch.

And then there's the fact that the phone itself just wasn't any good. The stock camera was weak. It ran an old processor. It had massive bezels and was uncomfortably thick, making it look like a funfair hall of mirrors version of a phone from 2011.

And worse, it cost $1,295, which is firmly within flagship territory.

Although we won't see a successor to the Hydrogen One, Red promises to continue providing support for it. In the meantime, the business has plans for a new camera, the Komodo 6K, which will be released in the near future. ®