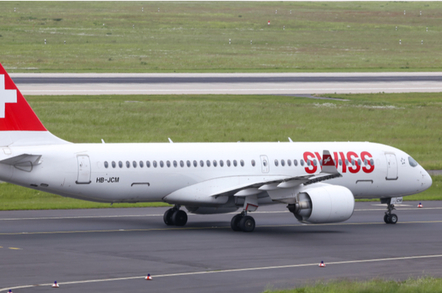 Software alterations have been fingered as the cause of Airbus A220 airliner problems that led to at least three emergency landings after excessive vibration caused engines to fail, according to reports.

Financial newswire Reuters reported that "recent changes in engine software ... may have caused parts that compress air inside the engine to be set in a way that caused mechanical resonance or destructive vibrations", citing sources familiar with an ongoing investigation.

That investigation is looking into why airlines, in particular Swiss International Air Lines (SIAL), are having problems with their new A220s. SIAL has been hit hard by issues with its new jets' Pratt & Whitney PW1500G engines; the airline has had three engine failures since buying the A220 three years ago.

Pilots for SIAL have been instructed not to use "certain combinations of thrust settings and altitude" until the root cause of the engine failures has been found, including a fingertip search of French fields where parts of a damaged PW1500 engine are thought to have fallen to earth from a stricken A220. It also might be prudent to hold off until a software patch is issued to correct the underlying flaw.

"Clearly, any time you get an issue like this, we're on top of it. The guys are working through it," Pratt & Whitney chief exec Greg Hayes told analysts on a conference call.

Engine failures in modern turbofan airliners are rare, hence the outcry in aviation land. Back in 2015 Pratt & Whitney, maker of the PW1525G engine option available for the A220 (the basic PW1500 model is available in four different versions), told aviation trade mag Flight Global that it was testing a software update for the engine which would increase its thrust output without needing any "hardware" changes. Veep Graham Webb said this would mean running at hotter temperatures, thus increasing maintenance costs.

An aviation blogger recently claimed to have been told by an Air Baltic exec that the Latvian airline had carried out 50 engine changes on its A220s between December 2016 and October 2018. The A220, previously known as the Bombardier C-Series, only entered commercial revenue service in June 2016. Air Baltic currently has 20 A220s and the timescale described would have been when brand-new aeroplanes were first being delivered to the airline.

Airliner engines are designed to run for thousands or even tens of thousands of hours on the wing between changes, giving them an expected on-wing time normally measured in months or years. Pratt & Whitney arch-rival CFM International boasted in 2003 that one of its CFM56 engines had spent more than 40,000 hours on the wing (four-and-a-half years of power-on engine-running time alone, not counting time spent parked up overnight) without needing to be removed for maintenance.

Software issues in airliners were thrust sharply into the public mind by the two fatal Boeing 737 Max crashes, with today seeing the publication of an Indonesian report into the causes of the second crash. Not so long ago Airbus advised operators of its A350-941 aircraft to power cycle them every 149 hours, while back in 2015 Boeing's 787 Dreamliner infamously suffered from a similar memory overflow bug that risked on-board generators shutting down in flight. ®