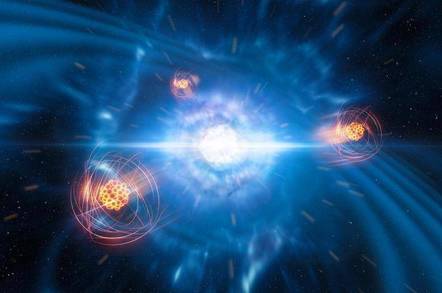 For the first time astroboffins have discovered strontium, a heavy element nestled near the bottom left hand side of the periodic table, being manufactured in space by the collision of two neutron stars.

The findings, reported in a paper in Nature on Wednesday, are a vital piece of the puzzle to understanding how elements heavier than iron are forged in the universe.

“This is the final stage of a decades-long chase to pin down the origin of the elements,” said Darach Watson, first author of the paper and an associate professor at the University of Copenhagen in Denmark.

It’s well known that elements are produced in the cores of hot stars. As atomic nuclei larger than hydrogen and helium fuse together under the heat, heavier elements are made. The process known as nucleosynthesis typically stops at iron, however, because – simply put – there just isn’t enough energy in stars to churn out larger nuclei.

To go further, it requires extreme environments with copious amounts of free neutrons to kickstart something known as “rapid neutron capture,” where atomic nuclei can swallow neutrons at higher rates to create heavier elements beyond iron. Although researchers understand rapid neutron capture, they’ve never been able to confirm where it naturally takes place in space.

“We know now that the processes that created the elements happened mostly in ordinary stars, in supernova explosions, or in the outer layers of old stars. But, until now, we did not know the location of the final, undiscovered process, known as rapid neutron capture, that created the heavier elements in the periodic table,” said Watson.

The team of researchers led by the University of Copenhagen decided to look around GW170817, a neutron star merger event that led to a sighting of gravitational waves detected by observatories on Earth. Neutron stars have, well, lots of neutrons after all. And if they’re merging, the chances that atomic nuclei will slam into the particle will be higher, thus making it easier to detect heavy elements in the resulting explosion.

They studied the spectrograph taken by the European Southern Observatory’s X-shooter instrument aboard its Very Large Telescope in Paranal Observatory, Chile, to find the presence of strontium.

“This is the first time that we can directly associate newly created material formed via neutron capture with a neutron star merger, confirming that neutron stars are made of neutrons and tying the long-debated rapid neutron capture process to such mergers,” concluded Camilla Juul Hansen, co-author of the paper and a research fellow at the University of Copenhagen. ®