Franco-stein's on the move: Spanish dictator turfed out of decadent mountaintop mausoleum

Remains exhumed and relocated to Madrid 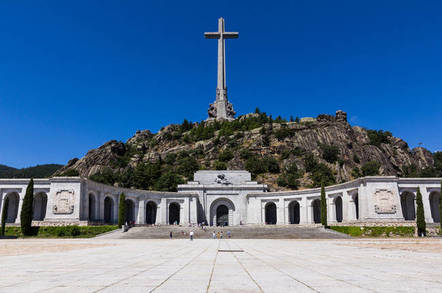 The remains of Spanish dictator Francisco Franco have been exhumed from the civil war monument Valle de los Caídos and are being transported to a cemetery just north of Madrid.

The draped coffin was carried out of the mausoleum by members of his family, placed in a hearse and blessed by a priest. They will then be transferred to a helicopter for the journey to Spain's capital. The media was kept off the site.

The priest who oversaw the service was also the son of the Guardia Civil captain who led the failed coup in 1981.

The exhumation was opposed by Franco's descendants, the Benedictine monks who run the site, and many on the far right. But the Supreme Court ruled in favour of the caretaker government that the remains should be reinterred in the Franco family plot. The issue remains violently divisive and symbolic in Spain.

The Historical Memory Law was passed in 2007 to recover the remains of thousands of civil war victims in unmarked graves around the country. But efforts to exhume these bodies or mark the graves have been stymied by parties on the right who consider the issue unnecessarily divisive and belittling of the transition to democracy.

Valle de los Caídos (Valley of the Fallen) claims the world's largest cross and because of its location on top of a mountain is visible for miles around. The basilica is dug into the side of the mountain and contains the remains of 30,000 people killed in the war. It was built by political prisoners after the war ended.

Only two graves are marked, that of Franco and that of José Antonio Primo de Rivera, founder of the Spanish fascist group Falange Española (Spanish Phalanx). Only Franco's was marked with fresh flowers when this reporter visited in June. The site frequently hosts ceremonies by far-right groups.

Franco was buried in the vast mausoleum in 1975 and the site continues to be associated with him rather than being a memorial to all the dead. There's more from El Pais, in English, here. Live coverage from RTVE here. ®

Pics So you won’t be able to, you know, mock Mariano Rajoy like this…