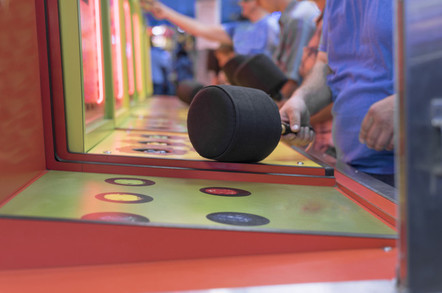 Intel is taking legal action against a spider's web of patent holders from SoftBank-owned Fortress Investment Group and its network of subsidiaries.

The Japanese megacorp bought the group for $3.3bn in late 2017, and Chipzilla claims Fortress has become more aggressive in an effort to justify its sales price to its new owners.

Intel is suing the company under the Sherman and Clayton antitrust acts to "prevent and restrain Defendants' anticompetitive conduct".

Intel argues in court documents (PDF) that Fortress is asserting patent rights that would not have been considered enforceable by their original owners.

The documents also claim that Fortress has no interest in licensing these patents in the normal way, but prefers to boost the value of its patent portfolio by linking worthless patents with valuable ones.

This war chest of aggregated patents, Intel alleges, allows Fortress to bring case after case against a company until it folds or pays well over the market value for the intellectual property held to stop the litigation.

This strategy, Intel claims, makes it more likely that weak or unenforceable patents are found to be valid in the courts because they are aggregated with patents that may have some merit. It also gives Fortress the opportunity to gain sets of patents that could provide alternatives to each other, which damages competition in the same way that a merger of competing companies can.

The chip flinger cites a Boston University study suggesting that patent litigation costs were about $29bn in 2011.

Intel argues that by going after electronics companies, Fortress is increasing costs to consumers, reducing competition and cutting investment in R&D.

Further, Intel claims that because the patents are held by a network of confusingly connected companies, it is far harder to license the worthwhile patents Fortress holds. Also because the companies are just patent holders, they have an incentive to aggressively pursue court action, whereas a company that used the patent for business does not.

Intel's lawyers are focusing on the transfer of NXP Semiconductor patents to Fortress's subsidiary VLSI and a deal with DSS.

The lawsuit notes VLSI used patents picked up from NXP to try to claim infringement within almost every Intel processor sold since 2011. On the same day the case was eventually stayed in California, VLSI filed again in Delaware. When it looked like the two cases in Delaware would be merged, VLSI stopped that case and, again on the same day, filed a new case in Western Texas.

Another deal in Intel's sights is one with Uniloc Entities covering 600 patents. These, Intel claims, include Standard Essential Patents for cellular technology which originated with Philips.

But the complaint claims: "Philips had provided a commitment to the European Telecommunications Standards Institute ('ETSI') to license any of its essential patents on fair, reasonable, and non-discriminatory ('FRAND') terms and conditions."

Intel is demanding that contracts found in violation of the Sherman Act be declared void and patents transferred as a result of those contracts declared unenforceable. It is also seeking damages and costs. ®