Chinese customers to unfold their Huawei Mate X on 15 November

And rest of the world? When it comes, you'll likely need to Play Huawei for apps 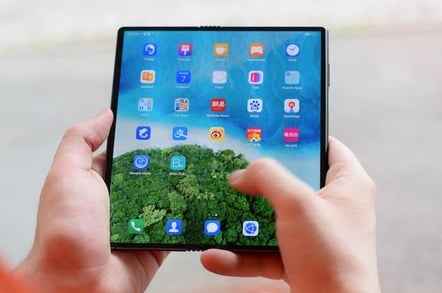 In a Weibo post earlier today, Huawei opened pre-sales of the much-delayed phone, with units expected to ship to customers in China on 15 November. The cheapest model, which packs 8GB of RAM and half a terabyte of storage, retails at ¥16,999 – which translates to $2,400, or roughly £1,900.

The Huawei Mate X packs the same Kirin 980 chip as the Mate 20 5G handset, which was released in July of this year. A follow-up already planned for next year, called the Mate Xs, will pack the more potent Kirin 990 chip from the recently released Huawei Mate 30.

Unlike the Samsung Galaxy Fold, the Mate X is completely flat when closed. This gives it a slimmer profile, making it easy to slip into a back pocket. And with no notches or bumps, the display is an unbroken quadrilateral. All the externally visible electronics – like the camera and LED flash – sit on the device's handle.

Huawei claimed this morning that it had shipped 200 million smartphones "to date" in 2019, apparently outstripping the same shipment milestone last year by about two months. However, notably, it did not reveal the locations where the gear was sent and earlier this week admitted the US sanctions were hurting its phone business. Gartner noted in August this year that the Chinese firm had reported very little smartphone shipment growth outside Greater China in Q2.

Senior research director Anshul Gupta told El Reg at the time: "Huawei sales were up, but the majority of growth came from Greater China where it did quite well due to promotions and an aggressive sales strategy."

According to market analyst Canalys, the smartphone market declined 4.6 per cent to 1.388 billion in 2018, although Huawei grew 34.5 per cent to 206 million units.

Huawei initially promised a July launch for the Mate X. That date was later pushed back to September because the company wanted to ensure the quality control was up to scratch following the Samsung Galaxy Fold launch debacle, where samples provided to journalists broke in a matter of days.

So far, there's no word on an international release. In a statement released earlier today, the company said its rollout strategy for the Mate X is contingent on the regional availability of 5G.

If the Mate X eventually launches overseas, it'll almost certainly ship without Google's default apps, which include the Google Play Store. This is a consequence of the ongoing embargo against Huawei by the Trump administration, which has put the firm and many affiliated companies on the Entity List, which forbids American firms from selling or licensing technology to those on it.

Instead, the device will pack the open-source version of Android, paired with the firm's own apps. As a company representative told this journalist at Berlin's IFA conference last month, it is investing heavily into its app marketplace, the Huawei App Gallery, to attract developers.

Whether that will close the gap enough to satisfy the ordinary phone-buying public is a moot point. ®