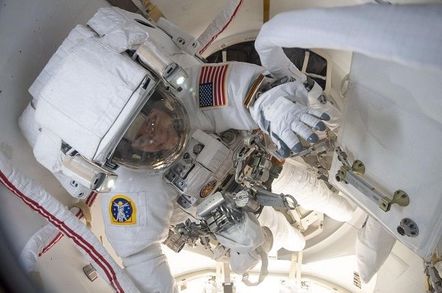 Jessica Meir inside the US Quest airlock (pic: NASA)

After a postponement due to suit sizes, which said more about the parlous state of NASA's spacewalking gear than the astronauts themselves, the first spacewalk consisting entirely of female crew members occurred last week.

A little lost in the excitement of the gender first was the fact that the duo successfully swapped out a failed battery charge-discharge unit (BCDU) as well as fitting a stanchion on the Columbus module ahead of the Bartolomeo science platform, due for launch in 2020.

The seven-hour spacewalk was the eighth outside the International Space Station (ISS) this year and the 221st in support of the outpost. It was Jessica Meir's first time and the fourth for Christina Koch, who is on an 11-month stay to allow researchers to study the effect of long-duration spaceflight on women.

Historical firsts aside, the spacewalk is more a result of simple scheduling following NASA selecting equal numbers of men and women in 2013's astronaut class. While the event is to be applauded, it should be regarded as a natural result of the efforts NASA has (finally) made in terms of diversity rather than some sort of publicity stunt.

Perhaps the greatest challenge faced by the spacewalkers was a call from US President Donald Trump, to celebrate what he declared was "the first time for a woman outside of the Space Station".

We wonder what four-time EVA astro Koch made of that after the crew corrected Trump. It was, after all, the 43rd spacewalk with a woman in a spacesuit.

As the link failed, as links do, Trump plaintively quipped: "Maybe they didn't like my message?"

We'll draw a veil over the rest of Trump's blathering about the US space programme. You can watch it yourself here.

The ExoMars gang is still grappling with the probe's parachutes, which failed in tests earlier this year.

The parachutes, designed to stop the descent module of the ExoMars mission (and its precious rover cargo) smacking into the surface of the red planet, have been troublesome with both 15-metre primary and 35-metre secondary 'chutes suffering damage. Design changes for the 35-metre parachute still saw damage in a second test.

ESA boffins have picked NASA's brains – after all, the agency has some experience in the field – and gained access to facilities at NASA's Jet Propulsion Laboratory "to conduct multiple extraction tests" ahead of the next high-altitude drop test.

That next test, in Oregon, is due in January-March, ahead of ESA's acceptance review at the end of April. While the team would dearly like to fit the parachutes (in their canister) before shipment to Baikonur in April, the integration could happen at the launch site in May.

It is all getting a little tight. The Proton rocket carrying the spacecraft has a launch window from 26 July to 11 August.

Should all go well, the ExoMars rover (aka the Rosalind Franklin) will land on the Martian surface in 2021.

After spending seven years studying the Van Allen belts, Spacecraft A was shut down last week as propellant finally ran out. Spacecraft B had been shut down three months earlier, having been placed into a safe orbit from which it is expected to re-enter the Earth's atmosphere in about 15 years time.

At 12:30pm EDT today the #VanAllenProbes will receive its final command. Elsewhere in space, @Astro_Christina, who worked on a science instrument for the #VanAllenProbes, participates in the world's first all-female spacewalk. Small solar system! @nasa
https://t.co/Y7lBUzxEiI pic.twitter.com/Pw9b9dbKaJ

The spacecraft far outlived their planned two-year mission and, according to Sasha Ukhorskiy, Van Allen Probes project scientist at Johns Hopkins APL, "rewrote the textbook on radiation belt physics". Among other discoveries, the probes noted that rather than the two concentric belts originally thought by scientists to be present, a third can briefly form during intense solar activity.

First discovered in 1958 (although scientists suspected their existence prior to the Explorer 1 and Explorer 3 missions), the radiation belts surrounding the Earth were named for James Van Allen, a professor at the University of Iowa and head of the Physics and Astronomy department.

The two probes, launched on a single Atlas V in 2012, had continued collecting data in the harsh environment, bombarded by particles and radiation until the fuel finally began to run out and the duo were placed in a low, circular orbit where they would eventually succumb to atmospheric drag rather than become orbital debris.

"Seven years is a very long time," said Ukhorskiy, when Spacecraft B was retired, "people who came onto this mission as students and post-docs are now well into their careers. We've raised a new generation of scientists.

"It's a great legacy for the Van Allen Probes." ®