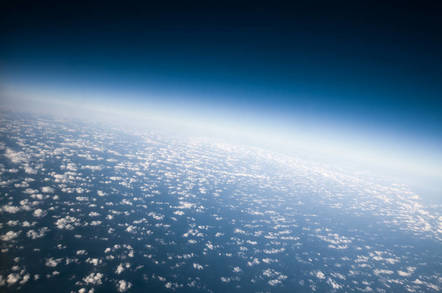 The hole in Earth’s ozone layer is the smallest it has ever been since scientists discovered the puncture nearly 35 years ago, according to NASA.

“But it’s important to recognize that what we’re seeing this year is due to warmer stratospheric temperatures. It’s not a sign that atmospheric ozone is suddenly on a fast track to recovery.”

The gaping hole in the ozone layer was first observed in the 1980s and was caused in large part by pollutants such as chlorofluorocarbons (CFCs), a group of volatile compounds, split apart under UV radiation in the stratosphere to release chlorine atoms. These free radicals with a spare electron readily reacted with ozone molecules - made up of three oxygen atoms - breaking them apart to become to produce oxygen and more chlorine free radicals.

Over time the chemical reactions snowballed, eating a hole into the ozone layer, making it more easy for harmful UV radiation to penetrate through our atmosphere.

In a bid to save the ozone layer, scientists introduced the Montreal Protocol to ban CFCs and other ozone-destroying chemicals in products like aerosols and solvents in 1987, and it was backed by politicians like the UK's Mrs Thatcher. As a result the hole has been shrinking, and this year it’s gotten to its smallest size yet recorded, at around 10 million square kilometers or 3.9 million square miles.

Although the rupture is slowly repairing, there are still CFCs that remain in the stratosphere today and their impacts are enhanced when the temperatures are colder. But the polar vortex, the annual swell of cold air, has been “unusually wonky” this year, leading to an effect known as a stratospheric warming. The elevated temperatures have slowed down the ozone depletion, keeping the hole at its small size, NASA explained in a video below.

“This is the third time in the last 40 years that weather systems have caused warm temperatures that limit ozone depletion,” said Susan Strahan, an atmospheric scientist with Universities Space Research Association, who works at NASA Goddard. Similar patterns were seen in 1988 and 2002.

“It’s a rare event that we’re still trying to understand. If the warming hadn’t happened, we’d likely be looking at a much more typical ozone hole,” she added. ®

Space launches could be capped to save ozone layer

Fun? Interesting? Useful? Bad for you

This year's ozone hole set to be a whopper