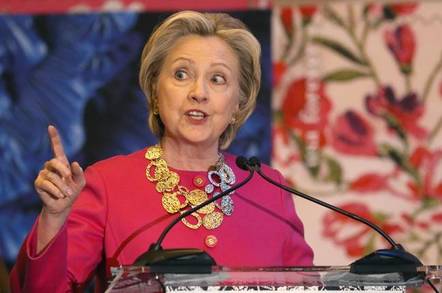 The US State Department has delivered its report [PDF] into Hillary Clinton's use of a personal email system and, amazingly enough, there wasn't anything scandalous nor classified on it at the time.

But for the private server, Clinton's tenure as Secretary of State would have been exemplary and her presidential run calmer. However, the mind-boggling furor in the media over the system in the months and days before the 2016 election put a significant dent in all that. It gave Donald Trump and his supporters the rallying cry of "Lock her up." It was a spilled tank of gasoline ignited by a match in the form of James Comey's bombshell letter reopening an FBI probe into her emails.

The acres of coverage given to the email system alone didn't swing it for reality TV star Trump, but it helped. In reality, the server was boring: there were no super serious state secrets just waiting for hackers to pick off, as some feared.

"A typical security violation involves pre-marked classified information discovered contemporaneously with the incident," the report, sneaked out on Friday evening, read. "None of the emails at issue in this review were marked as classified."

The best Senator Chuck Grassley (R-IA) could come up with was this criticism: "The investigation concluded that Clinton’s use of a personal email server to conduct official business increased the risk of unauthorized disclosures and security compromises," he noted.

So, in short, Clinton was cleared of any criminal or serious wrongdoing, and her IT provider won't face any sanctions – although there was some wrist slapping in the report. Because, look, it wasn't smart to run an external system handling official business, but it wasn't the end of the nation as some screamed.

The State Department's internal investigators' probe "resulted in the adjudication of 91 valid violations attributable to 38 individuals." Translation: setting up an unclassified personal email system external to the department's protected IT infrastructure, and using this system for official business, broke 91 internal rules on best practices. Nothing criminal, just dumb. Just like the whole thing about the deleted emails was cock-up rather than conspiracy.

There were also "497 valid violations where no individual was found to bear culpability, resulting in a 'valid, but not culpable' determination," according to the report.

"While there were some instances of classified information being inappropriately introduced into an unclassified system in furtherance of expedience, by and large, the individuals interviewed were aware of security policies and did their best to implement them in their operations," the dossier continued.

In other words, the people running the external email system at least tried to keep the thing secure. And "classified information" here means information that was later classified; at the time Clinton and her aides handled the info, it was considered unclassified.

The low-key release of the report indicates Clinton ought to be in the clear. In the current political climate, if there was any serious malfeasance, the State Department would be shouting it from the rooftops.

Then again, it could just be embarrassed on behalf of the Republican National Committee, which ran its own private email servers for years until discovered in 2007, whereupon it wiped millions of emails before investigators could check them out. ®

It won't pass but hey, why pass up a partisan punch-up?

How about you try winning an election first, folks

US Democrats call in Feds: There's something phishy going on with our voter database

Updated Um, yeah, it was an anti-phishing security test

Roundup BBFC gets a side job shilling shoes