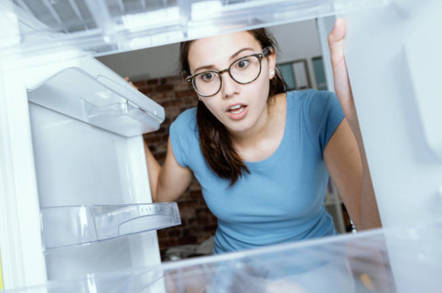 Readers anxious for an update on the health of the wobbly Samsung smart fridge currently squatting in UK retailer John Lewis's Oxford Street store will be interested to learn that a culprit has been fingered.

Samsung told us on Friday that the alarming security message on the screen was actually down to "the activation of security controls by the in-store Wi-Fi network, which help prevent unsavoury content from being accessed by customer devices during demonstration".

"Attempted access to these sites can result in an SSL certificate error such as the one displayed on screen," Samsung explained.

So, if you suggested that perhaps someone was trying to idle the time away with a grumble flick or two while a significant other was spending forever in the clothing department, congratulations!

At least the fridge door should be wipe-downable.

We contacted the department store for its take on matters but have yet to receive a reply.

Those keen to take one of Samsung's £3k chillers home will be relieved to know: "It is unlikely for this issue to occur when used at home on domestic Wi-Fi as security controls are standardised by the router and ISP, and security certificates are likely to be authorised automatically," according to the electronics giant.

The Samsung spokesperson added that John Lewis had far more restrictive Wi-Fi than that found in domestic situations, meaning that the fridge will not stop a customer browsing for all manner of unsavoury content regardless of the savouries behind the door.

What John Lewis deems as "unsavoury" is unclear. Large chunks of Reddit spring effortlessly to mind as well as the usual suspects.

We, however, salute the courage of the brave soul that tripped the in-store safeties on a 21.5-inch screen attached to a fridge in search of content deemed unsafe for customers.