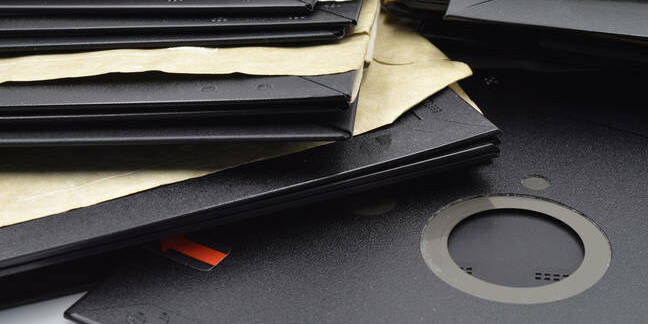 The US Strategic Automated Command and Control System (SACCS) has reportedly replaced the ancient eight-inch floppy disks it uses to store data on the US nuclear arsenal.

Defense news site C4ISRNET today cites officers from the Air Force 595th Strategic Communications Squadron – the unit that actually manages the system – in reporting that earlier this summer, the antiquated IBM floppy drives were replaced with what was described as a "highly-secure solid state digital storage solution."

We're pretty sure that just means a 4GB thumb drive, but it could be anything: use your imagination.

The SACCS machine, a 1970s-era IBM Series/1 behemoth charged with keeping track of both missiles and aircraft, made headlines back in 2016 when it was among the outdated systems described by the US Government Accountability Office (GAO) in a damning report about the continued use of obsolete technology by Uncle Sam, including ancient mainframes and critical applications written in COBOL.

Released in 1976, the Series/1 was originally pitched as a highly customizable and adaptable machine. It cost anywhere from $10,000 to $100,000 and offered rack-mounted memory units that could be stacked for up to 131,072 bytes of storage. The line was discontinued and off the market by the late 1980s.

The eight inch disks, developed in the 1960s at IBM's San Jose skunkworks, each held about 80KB of data on the current state of the nation's nuclear forces. The drives had been among the units slated for replacement as part of a "modernization" effort.

Emphasis on the quote marks, as in this case there is still plenty of 1970s tech that is going to continue being used. The report notes that the Air Force favors the Series/1 machine for SACCS in part because the ancient machine cannot be accessed with conventional network protocols, adding extra layers of security to the program.

Still, it is reported the entire system is due to be replaced over the coming year. ®

Silicon Valley's contribution to the US Republican Convention: Gayness

Taking on Bromium? Beating Citrix to the punch?

Working on new systems at the Chocolate Factory

Software defined networking works up a head of steam

Automation takes over the data centre

Search engines we have known ... before Google crushed them

Feature Dot.coms of the past slurped themselves into oblivion