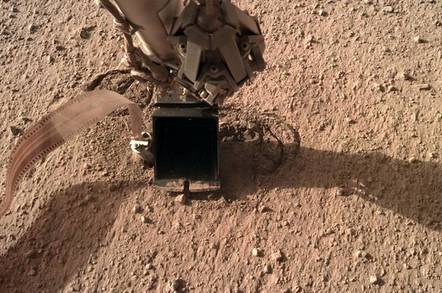 There was good news for Martian miners this week as NASA's stuck mole began making progress into the red planet's soil once more.

The multinational instrument, a key part of the payload of NASA's InSight spacecraft, had been stuck at the 30cm mark out of a hoped-for 5m after hammering began in February. Boffins used the lander's robot arm to lift the mole's support structure to give InSights' cameras a better look and discovered to their horror that the burrowing device was merely bouncing around in its hole.

Engineers suspected that the self-hammering probe had hit tougher-than-expected soil rather than a rock and formulated a plan to save the stricken device involving using that robot arm, equipped with a scoop, to compact the soil around the mole.

It was a tricky manoeuvre, but essential since the mole cannot simply be lifted and moved elsewhere.

The team went on to press the scoop against the mole to afford extra grip, and the good news is that the fix appears to be working.

Writing in his blog for the Deutsches Zentrum für Luft und Raumfahrt (DLR), principal investigator Tilman Spohn said the Heat Flow and Physical Properties Package (HP3) had moved "a total of two centimetres" thanks to the technique of "pinning" the drilling probe against InSight's scoop.

That movement is great news for engineers, since it indicates that there is unlikely to be a rock impeding progress, just a lack of friction from the Martian sand.

Of course, the mole is not out of the woods yet. Eventually, InSight's scoop will not able to keep it pinned as it burrows into Mars and HP3 will have to go it alone on its journey up to five metres into the planet's interior.

The scoop will be able to push down on the soil while the mole is at a shallow depth, carefully avoiding the tether attaching the instrument to the lander, but eventually it will be on its own.

"The mole still has a way to go, but we're all thrilled to see it digging again," said Troy Hudson of JPL, an engineer and scientist who has led the mole recovery effort. "When we first encountered this problem, it was crushing. But I thought, 'Maybe there's a chance; let's keep pressing on.' And right now, I'm feeling giddy."

It is difficult, even for we cynical vultures, not to share Hudson and Spohn's enthusiasm as recovery efforts continue at a distance of many, many millions of miles. As well as unexpectedly hard soil beneath the surface, the gang has also had to deal with data errors in the electronics due to a suspected bit-flip caused by cosmic rays.

The team dealt with that particular issue in time-honoured fashion – a reboot. Even on Mars, sometimes a Ctrl-Alt-Delete is all you need. ®