Oracle co-CEO, and ex-HP boss, dies aged 62 after stepping aside for health reasons 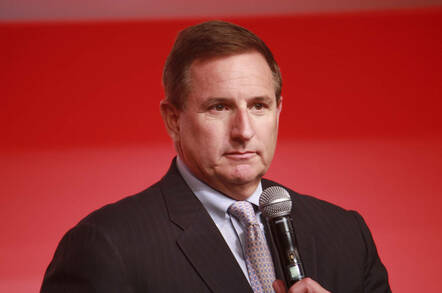 "It is with a profound sense of sadness and loss that I tell everyone here at Oracle that Mark Hurd passed away early this morning. Mark was my close and irreplaceable friend, and trusted colleague," Ellison wrote. "Oracle has lost a brilliant and beloved leader who personally touched the lives of so many of us during his decade at Oracle."

Hurd will be remembered for helping HP and Oracle pivot their business models from traditional to new markets. First, as HP slimmed down its operations in the early 2000s and slashed and burned cost centers as he saw them, and later as Oracle shifted from a focus on on-premises technology to cloud-deployed services in this decade.

After graduating from Baylor University in Texas in 1979, Hurd got his professional start at point-of-sale equipment specialist NCR in the early 1980s. Over 25 years he worked his way up through sales and management positions to eventually become the company's CEO in 2005.

His first run at chief executive was both successful and short-lived. In that same year, HP was sufficiently impressed with Hurd to name him the successor to Carly Fiorina as CEO of the iconic American computing brand.

Hurd almost immediately saw the IT giant rocked by controversy, as in 2006 a scandal erupted over board members allegedly illegally spying on journalists in hopes of sussing out the source of internal leaks. Criminal charges were eventually brought against board chairwoman Patricia Dunn, and handed Hurd his first major crisis to deal with. (Dunn denied any wrongdoing, and the allegations were dropped. She died in 2011 of cancer.)

"I have seen a lot of stuff in my career," Hurd said of the surveillance scandal. "I think I have probably never seen anything like this. I am in charge of the company. I am responsible for HP. Responsibility goes across the entire company including myself."

Besides the apparent snooping, HP saw its bottom line improve under Hurd as a series of cuts forced the IT giant to focus its operations around PCs, servers, and printing while developing more cloud services. As a result, HP grew its bottom line over the next half-decade, albeit at the expense of a stagnant R&D operation, leading some to ponder if the rise in profits was merely a short-term gain.

By 2010, Hurd's career took another, less pleasant, turn when allegations of sexual harassment were brought against him by Jodie Fisher – the model-and-reality-telly-star-turned-HP-greeter. Hurd, a married family man, abruptly resigned from his $17m-a-year post amid claims he repeatedly tried to awkwardly solicit Fisher for sex and fiddled his company expenses to hide dinners and other spending with her. When all was said and done, he was handed a $53m severance package to go on his way quietly.

Hurd's time in business purgatory would be short-lived, as rival tech boss and longtime friend Larry Ellison made a public show of snapping up Hurd and immediately appointing him as co-president alongside Safra Catz.

The duo of Hurd'n Catz would go on to run Oracle for the better part of the decade, eventually taking over the shared CEO title from Ellison and helping to spearhead an effort by Oracle to go from an on-premises database and middleware specialist to a player in the cloud market.

The campaign was something of a roller-coaster for Hurd and Oracle, and by mid-2019, cloud was a $6.8bn a-quarter business for Big Red, more than half of its earnings.

Hurd's time at Oracle came to a halt in September when he announced he was taking a leave of absence to recover from an ongoing illness. At the time, it was unreported and unconfirmed, though widely believed within the industry, that Hurd was suffering from cancer. Oracle declined to comment on the executive's health.

Ultimately, Hurd's condition was indeed grave, as just five weeks after stepping aside from his post, his death was confirmed by his friend and former boss Ellison.

Hurd's legacy as a businessmen will be one of a "solid" leader who helped two of the largest tech companies in the world right themselves in times of crisis.

"Mark Hurd brought solid business pragmatism to a tech industry that was drunk on its own self-mythologizing, said Charles King, long time industry watcher and principal analyst with Pund-IT. "He helped to usher IT into new kind of maturity following the wretched excesses of the dot.com era."

At the same time, Hurd committed missteps that cost his companies and helped, in some small way, usher in a new era of scrutiny for executive misconduct and harassment.

Mark Hurd is survived by his wife Paula and two daughters. ®