Everyone knows the Ramans do everything in threes 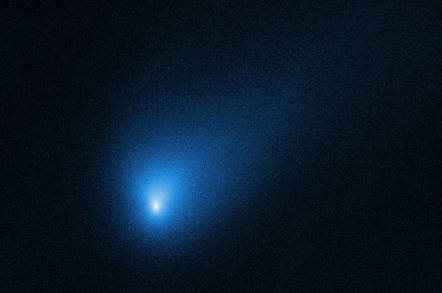 Pic Astroboffins have released images taken by the Hubble telescope of the second-ever interstellar object and the first-ever verified comet to enter our Solar System from the depths of the universe.

Dubbed comet 2I/Borisov, the speeding bundle of rock and dust was detected back in August by Crimean hobbyist Gennady Borisov and later documented in a series of snaps by Hubble, which were released to the public on Wednesday.

Astronomers with the International Astronomical Union and NASA JPL determined that, based on its trajectory and speed, the comet had to originate from outside the Solar System.

Unlike 2017's Oumuamua encounter, where scientists were hard-pressed to categorize the small cigar-shaped rock, Borisov is believed to be much more of a conventional comet, casting off a tail of dust and vapor as it passed by the Sun.

"Oumuamua looked like a bare rock, but Borisov is really active — more like a normal comet," said David Jewitt, a University of California Los Angeles professor who lead the Hubble observation of the comet.

"It's a puzzle why these two are so different. There is so much dust on this thing we'll have to work hard to dig out the nucleus."

Borisov's more conventional structure will allow astronomers to better compare the interstellar comet with those that formed within our Solar System and were knocked loose from either the Oort cloud or the Kuiper belt.

"Though another star system could be quite different from our own, the fact that the comet's properties appear to be very similar to those of the solar system's building blocks is very remarkable," offered Amaya Moro-Martin of the Space Telescope Science Institute in Baltimore, Md.

While NASA estimates that there are thousands of interstellar comets in the solar system, actually spotting and photographing the faint, fast-moving objects can be extremely difficult.

Borisov, for example, is estimated to be traveling at 110,000 miles per hour and will make its closest appearance to the Sun on December 7, at around 186 million miles. By mid-2020 it will be 500 million miles from the Sun and be heading back out into interstellar space.

NASA says Hubble will be able to monitor the comet's progress until January, though it could continue to watch the comet if more observations are approved. ®