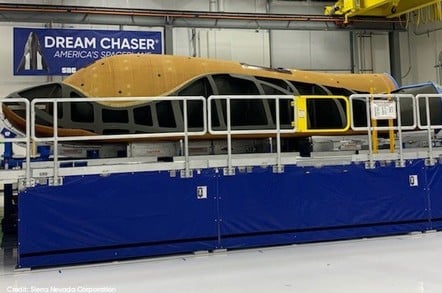 Sierra Nevada Corporation (SNC) has wheeled out the first production version of its Dream Chaser spacecraft ahead of a 2021 mission to the International Space Station.

Of course, this wasn't the completed vehicle, but rather the "primary vehicle structure", as the company put it.

We're a little surprised that no wag thought to hang a "some assembly required" from the thing, because it is clear there is still a way to go before the lifting body will be ready for launch.

However, the hulk that has arrived at the company's Colorado facility is the largest part of the Dream Chaser and "the most advanced high-temperature composite spaceframe ever built".

One thing missing from the mini-shuttle was windows. It will be cargo-only for the time being and carry pressurised payloads to and from the ISS. At least six cargo resupply and return missions are planned for SNC's reusable vehicles under the Commercial Resupply Services (CRS) 2 contract with NASA.

The Dream Chaser will also be only the second vehicle able to return cargo to Earth from the ISS in any meaningful quantity (1,800kg should make it back inside the vehicle). And, unlike SpaceX's Dragon, which splashes down in the ocean, the Dream Chaser is capable of gliding to a considerably more gentle runway landing.

The structure itself was manufactured by NASA favourite Lockheed Martin. SNC will perform assembly and integration (including bolting on the still-to-arrive wings and cargo module), aiming for completion in April 2021.

The spacecraft will then be shipped to NASA's Glenn Research Center for environment testing before a jaunt to Kennedy Space Center for some rollout testing. The first launch is planned during Q3 of 2021.

The company does not plan any further drop testing of the lifting body, having got enough to validate the design from the original test article. It does, however, intend to build a second Dream Chaser (each vehicle can be used 15 times, according to SNC) and will construct a fleet of the things if demand materialises.

Sierra Nevada still harbours a desire to launch a crew (as originally planned), pointing out that 85 per cent of the cargo version of the Dream Chaser was the same as the hoped-for crewed incarnation. NASA, of course, has contracted with SpaceX and Boeing for commercial crew access to the ISS. SNC famously lost out in that round.

However, SNC hopes that once Dream Chaser has proven itself for cargo, humans could follow.

Although don't hold your breath for a return of those cockpit windows. Program Director John Curry commented: "I don't think I want to put the windows back in because it's a 500-pound hit and because the outer mold-line is impacted."

Former NASA astronaut and SNC Veep Steve Lindsey replied: "I feel very strongly both ways about windows... I'll leave it at that."

It's good to see the same arguments that went on in the Mercury programme endure today. We'd prefer to have windows too, rather than rely on what Curry called "enhanced vision systems".

Even if we have to lose a bit of weight to do so. ®