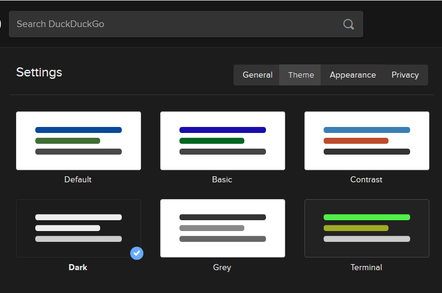 Alternative search engine DuckDuckGo has announced improvements to its search options and an enhanced dark theme, but its tiny market share shows that most people are content to stick with Google, despite privacy issues.

DuckDuckGo says it offers search without any user profiling, in contrast to the trend towards personalisation and targeted advertising favoured by its competitors. Founder Gabriel Weinberg says that profiling and tracking is unnecessary since simply presenting ads based on the keywords you type is sufficient for a business model. "If you type in 'dishwasher', you will get a dishwasher ad," he said.

The search engine draws from a variety of sources, including its own DuckDuckBot crawler and answer indexes, but also has a partnership with Yahoo! and Microsoft Bing for its search results. Its advertising is primarily syndicated from Bing Ads. New features include an improved date filter that lets you restrict results to the past year, where previously one month was the maximum time.

There is also an improved colour scheme for the site's dark theme. DuckDuckGo may not personalise your search results, but it does let you customise the way search is presented, including fonts and colours, safe search, infinite scroll, keyboard shortcuts, and even an option to disable advertisements completely in the settings – though even with advertisements off, the site still displays affiliate shopping links above the results when it makes sense to do so.

DuckDuckGo's market share is just 0.43 per cent globally according to Statcounter, though with notable variations by region. In the USA it is 1.28 per cent, and in the UK 0.63 per cent. Google search's global share is nearly 93 per cent, and it is hard to see that dominance changing while it remains the default in Chrome, Safari and Firefox.

The EU is making some effort to force Google to offer a choice of search providers but the scheme it has mandated means providers have to pay Google each time they are selected, with the amount determined by a closed auction.

Google has said that "the auction revenues help us to continue to invest in developing and maintaining the Android platform". This has not gone down well with Weinberg, who tweeted that "a pay-to-play auction with only 4 slots means consumers won't get all the choices they deserve, and Google will profit at the expense of the competition".

That said, DuckDuckGo's own traffic stats show steadily increasing numbers. The daily average in January 2019 was 34 million, and in September, 45 million. Those numbers also explain why even a small sliver of the search market is enough to sustain a business. ®