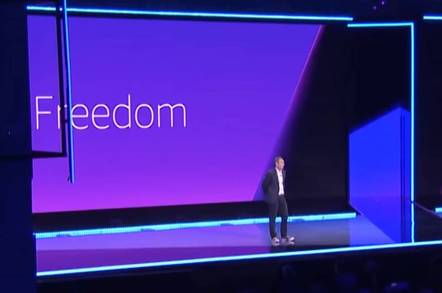 Amazon has turned off its final Oracle database, completing a migration effort that has involved "more than 100 teams" in the consumer biz.

At the 2018 Re:Invent conference in Las Vegas, AWS CEO Andy Jassy said: "The world of... the old-guard commercial-grade databases has been a miserable world for the last couple of decades for most enterprises... Databases like Oracle and SQL Server are expensive, high lock-in and proprietary."

What he did not say is that one of the victims of what he called "abusive and constraining relationships" with other database vendors was Amazon itself, which used Oracle in its retail operation for services including Alexa, Prime video, Kindle and Amazon Music, as well as for fulfilment, payments, ordering and advertising.

This is (mostly) no longer the case. AWS evangelist Jeff Barr reports that "75 petabytes of internal data stored in nearly 7,500 Oracle databases" were migrated to AWS database services.

Not all databases were moved to RDS; some, like the Financial Ledger, went to the NoSQL DynamoDB service, and analytics went to the data-warehousing service Redshift.

He also reported cost reductions and performance improvements, but this is unsurprising given the migration from third-party services to its own.

That said, Amazon is not quite Oracle-free. "Some third-party applications are tightly bound to Oracle and were not migrated," Barr wrote.

The new announcement is the latest in a long-running series. In April this year, Amazon said that Amazon Fulfilment was Oracle-free. In August 2018, Amazon said it was aiming to ditch Oracle by 2020, though Oracle said at the time: "We don't believe that Amazon Web Services has any database technology that comes close to the capabilities of the Oracle database."

Long-standing cloud enemies to do battle in the courts