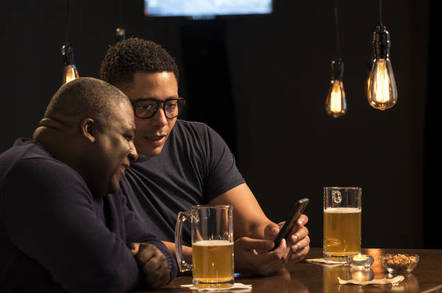 Can you believe it? They want us all to do breathalysers! Better make this the last beer

Bosses worldwide will be rejoicing after a British academic declared that banning work email use out of hours could negatively effect underlings' mental health.

The unwelcome news comes after a University of Sussex academic conducted a study which supported the idea of tailoring workplace email use policies around individual workers' personality traits instead of applying blanket use/no-use rules.

In a statement, the university said people "tend to have one of four goals in mind when they are dealing with work email – to show concern to others, to achieve their work effectively, to preserve their well-being, or to have control over their work."

Published in the Computers in Human Behaviour academic journal, the study enumerates no fewer than 72 actions that people apparently take while managing their work emails. We can count five – delete, mark as spam, forward, reply and read but ignore – and can only imagine that reaching the figure of 72 must include crying and rocking in the corner of the office while reading the full contents of one's inbox.

Lead researcher Dr Emma Russell, a psychologist and lecturer in management, chipped in to add: "Despite the best intentions of a solution designed to optimise well-being such as instructing all employees to switch off their emails outside of work hours to avoid being stressed, this policy would be unlikely to be welcomed by employees who prioritise work performance goals and who would prefer to attend to work outside of hours if it helps them get their tasks completed."

El Reg has heard of these workaholics but doesn't believe they exist outside Dilbert cartoons.

Dr Russell also informed us all that an agreeable person dealing with work emails "will prioritise goals to show concern to others, which may mean they respond more quickly to work email, or take care over the language and tone they employ when writing."

While we at Vulture Central think of ourselves as agreeable folk and take care over the language and tone of our work emails, we aren't quite sure we're doing that in the same way as Dr Russell suggests.

Last year New York City proposed banning out-of-office-hours emails, while all the way back in 2002 Liverpool City Council banned internal emails on Wednesdays over concerns that people were spending too much time gazing at screens instead of interacting in meatspace.

Whatever the study says, anything with the top line "don't ban out-of-hours emails after all" is bound to be seized upon by bosses everywhere. Best peel off that screen protector, and get ready to, er, accidentally spill that beer. ®