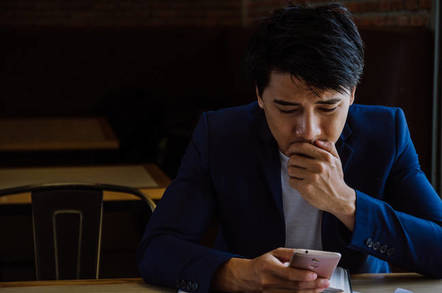 Vodafone has apologised for a "technical error" that left customers abroad facing thousands of pounds in roaming fees over the weekend.

It seems the issue was with an upgrade to Vodafone's customer account database. Consequently, customers in Europe and the US faced steep charges for data usage, with some people reporting bills as high as £9,000.

One customer got in touch with The Reg on Sunday to report they'd been hit for over £1,200 while in Prague. "Also services are being cut so [I] can't make phone calls when abroad and now [have] no data on phone. So [I'm] having to rely on Wi-Fi hotspots or buy a [second] local SIM card," he said.

Another sent us a screenshot of a bill for nearly £7,000. "Vodafone have cocked up on roaming this weekend. Lots of people getting disconnected and huge bills, me included," he said.

A number of folk also took to Twitter to complain over the weekend.

@VodafoneUK Been charged £5k for c200mb data in Malta last night. I’ve been here a week and used probably 10gig without a problem. Tried calling Vodafone this afternoon and after an hour my network has been cut off! So can’t even contact you. HELP pic.twitter.com/eYserfYxmb

A spokesman for Vodafone said: "We are very sorry that yesterday, some customers could not use data or calling services when roaming abroad. This was due to a technical error, which we have now fixed. Any affected customer should restart their phone to ensure that services are resumed.

"As a result of the issue, some customers are receiving billing messages in error; we are working through these as an urgent priority and removing any errors from customer accounts. Customers will not be charged and do not need to worry about contacting us as we are proactively checking accounts and fixing any issues."

In 2016, Vodafone was hit with a £4.6m fine from Ofcom for mis-selling to customers, inaccurate billing and poor complaints handling.

That was due to errors "during a complex IT migration", which involved moving more than 28.5 million customer accounts and almost one billion individual customer data fields from seven legacy billing and services platforms to one.

Since then, Vodafone has invested £2bn in upgrading its networks. ®