You shoved your documents where, exactly? 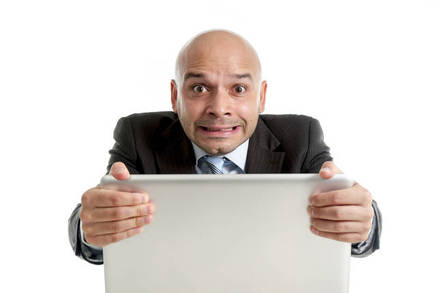 On Call Friday is that special time of the week when clocks seem to slow to a crawl and software giants drop their buggiest code. It is also the time when The Register pokes a talon into the sack marked "On Call".

Today's tale from the front line comes from a reader we'll call Jack, who worked for a publishing company. No, not us. This was back in the '90s when the impossibly youthful headline writers of today's Reg were drawing with crayons, smashing toys and occasionally soiling themselves.

So no change there then.

On the day in question, Jack told us, "I received a call from the President's administrative assistant."

The staffer was having problems with her shiny new Windows machine. Jack dutifully trotted over to the individual's desk to take a look. Obviously, "the drive is full."

Jack began to work through the usual Windows 95 space-saving "tricks" – emptying the trash (or "recycling bin" as Jack preferred to call it), wiping temporary files, clearing caches and so on.

In no time the computer was purring contentedly and the assistant was back up and running with no errors. Satisfied at a job well done, Jack headed back to the IT cave to await the next call.

It came soon enough, but this time in the form of Jack's manager instructing him to return to the administrative assistant. It seemed there were more issues.

To his alarm, it transpired that all of the Assistant's files had gone. Not one document remained. "I get confused, and check her 'My Documents' directory. She is correct, there is nothing there."

Doubtless feeling the fear-driven nausea that starts at the pit of one's stomach and races both head and sphincterwards, Jack checked and checked again. Had he accidentally cleared the wrong folder?

"So I ask 'Is there somewhere else she keeps her files?'"

Of course there was.

"She informs me she keeps them in the folder on her desktop."

Except there was no folder to be seen. Sure the user didn't mean...

The user cheerfully doubled-clicked on the trash can (or recycle bin) and showed Jack that her files were nowhere to be seen. For that was where she saved them.

After a second that must have seemed like an eternity, Jack explained what the magic folder actually was and asked: "Would she put her files from her desk into the trash can and be surprised the next day if they were all gone?"

Sadly, there is no record of the user's reaction. We suspect that Jack was blamed, Windows 95 was blamed and, of course, the name of Saint Bill Gates taken in vain.

Jack, however, swiftly downloaded an undelete tool and set about recovering what he could before gently suggesting to the user that "she use 'My Documents' instead of the trash."

You know, to store Documents in.

Ever found a user's important files in the strangest of places? Or a workflow lead to somewhere quite unexpected? Of course you have, and you should drop an email to On Call to share your experiences (and be given a natty pseudonym to boot.) ®