Public beta for new shiny, plus many Tasks make a Plan in upcoming Enterprise 2019.2 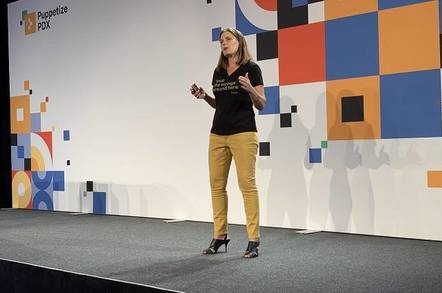 Puppetize PDX DevOps darling Puppet took to the stage at the company's Portland Puppetize PDX shindig yesterday to whip the covers off Project Nebula, before giving us a sneak peek at an updated Puppet Forge and a preview of Puppet Enterprise 2019.2.

Puppet, which prides itself in putting the C and D in CI/CD is best known for its automated deployment toolset, aimed at deploying change over a customer's infrastructure. Project Nebula takes the company's tooling and applies it to deploying apps and provisioning infrastructure for cloud native technologies.

Players of buzzword bingo will probably need to reach for a fresh game card.

The Project Nebula concept will be familiar to those used to defining infrastructure as code, and simply applies similar principles to the cloud-native world. The project is aimed at providing a single place to provision those cloud-native apps.

If something like GitLab is doing the Continuous Integration, Nebula will happily perform the Continuous Deployment part via workflows that can be shared through the company's Puppet Forge.

"It's a workflow tool I think we haven't really seen," explained Puppet's field CTO, Nigel Kersten, to us. "Tekton has been a really good sort of first step in that direction and that's why we're building on it with Nebula... that idea of a workflow which ties together all of these disparate elements."

"Particularly one that lets a small group of experts define some sort of best practice, and then have other people consume it."

Puppet CTO, Deepak Giridharagopal, expanded further, telling us that the beta software "gives you a single way to conceptualise from commit to deploy the entire assembly line for a cloud native application."

And, of course, when asked if one could use Nebula to deploy a containerised version of Puppet itself (the amusingly named Pupperware can be found on GitHub), Giridharagopal replied "Yes, you absolutely could."

To be fair, much of what Nebula does could be achieved by scripts, although the appeal of a visualisation of the deployment workflow is undeniable, as is out-of-the-box support for popular cloud-native deployment tools such as Terraform and Helm.

While Project Nebula is very much a beta at present, the Puppet gang were also keen to show off Puppet Enterprise 2019.2, which is aiming to hit General Availability on 5 November. The team has improved support for managing agentless nodes and networking devices as well as Plans from within the Puppet Enterprise GUI.

A Plan is a way of running a number of Tasks with a single command, replete with logic to change behaviour depending on the result of a Task (such as a change made to a remote system). The team has added the ability to share Plans as well as viewing step-by-step changes as Plan is run.

The updates are aimed at making Puppet Enterprise more attractive to those who would prefer not to have to bother a CLI, although the company is at pains to point out that the core functionality, if not the GUI, can be found in the open source Puppet.

Finally, the VP of user experience at Puppet, Alex Bilmes, teased a refresh of Puppet Forge, which the company intends to make "the centre of gravity for our entire product portfolio". Giridharagopal clarified this, explaining to us that while the underlying content would remain the same, a much-improved user experience would make it easier to find projects or templates that a user can drop into their own workflows.

The announcements represent a focusing of Puppet's efforts on what it has traditionally done best over the years, rather than attempting to nibble away at the overcrowded CI market.

Freshly appointed CEO Yvonne Wassenaar told us that, after assessing where the company could make the greatest impact, the team decided that "there's still unfinished business to do in our core areas of strength and infrastructure automation." ®

Want to know if all that cash you spent on consultants is paying off?

Put on your clogs, take a close look at what DevOps fave Puppet flung out this week