Top brass on keeping ISS lights on and life after Brexit 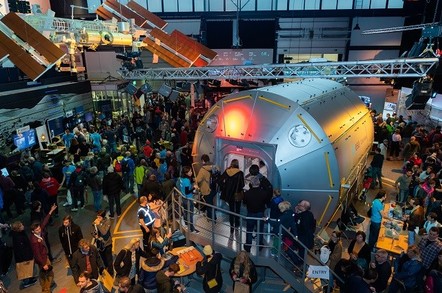 ESTEC The European Space Research and Technology Centre (ESTEC) in Noordwijk, Netherlands, opened its doors to the public last weekend, and The Register braved the rain to grill top brass on spaceships, partnerships and the "B" word.

The annual event, which this year saw 9,159 visitors crawl over the European Space Agency's (ESA) private parts, is an opportunity for those able to grab a free ticket to check out what their euros are being spent on.

Opening proceedings, ESA director general Jan Wörner joked that while the agency had plenty of Earth observation satellites, it had yet to devise a way of controlling the weather. The Reg caught up with him after the throng fled the rain to find out what the future held for the organisation.

Extending the life of the ISS beyond 2024, when NASA is expected to phase out funding, is naturally a priority. ESA has made some substantial investments in the outpost, not least the Columbus laboratory, which was launched on a Space Shuttle in 2008.

"Columbus is not the Columbus which was launched," Wörner told us. "It's already modified, it's upgraded." He added that as far as he was concerned (following advice from the Russian and American sides of the programme) there was no reason for the lab not to be used for another 10 years.

Assuming funding can be found.

If ESA is granted an extension from its governing council, Wörner expects some of that to be made up by commercial contributions, either renting space on the Bartolomeo exterior platform due to be sent to the ISS on a SpaceX Dragon next year, or inside Columbus itself. "We have more commercial activities with 'ice cubes', which are tiny modules we can bring up."

However, the next stage for crewed exploration is to get involved in NASA's lunar ambitions and Wörner shrugged off suggestions that the US rush to the regolith would be at the expense of sustainability. "The Americans want to have this little race in space again, OK. But at the same time, they want us to be partner for the Gateway for future exploration of the Moon.

"I think that we will have both. So there is the fast approach and then there is the sustainable approach. And this time, I'm quite sure that both will happen."

Iron Mike Pence will be pleased.

For the Lunar Gateway, a proposed space station in lunar orbit, ESA is looking to provide a habitation module and ESPRIT, a communications and connecting module. It's also providing the service module for NASA's Orion spacecraft with heritage pulled directly from the successful ATV ISS cargo freighter.

The director general also told us he expected ESA to take a leadership role in the handling of space debris and collision avoidance. After all, the agency had to move one of its Earth observation spacecraft out of the path of a SpaceX Starlink satellite ("both of them were active satellites," he tersely explained) and so has more space traffic experience than it might prefer.

And what of the UK's impending departure from the European Union? Wörner shrugged: "We are very happy that UK is and remains a member state of ESA," adding that he hoped the UK would be able to contribute in "a positive way".

The head of the ESTEC facility, Franco Ongaro, was a little less positive. "Realistically, it's going to have an impact on the EU programmes, of course. There's Galileo and Copernicus, but I believe there is going to be a number of impacts: even from, you know, getting stuff across borders which, logistically, for a place like this is a nightmare."

But he didn't think it would take long for the UK to come to some sort of agreement with Europe, for space matters if nothing else.

Ongaro had been shortlisted as a candidate for the European astronaut corps back in 1991, and was head of the Columbus Payload Interfaces Unit. Of course, he never did fly in space. Instead, he moved back to ESA's HQ in 1994, eventually rising to head up the ESTEC facility.

When asked what had changed for astronauts since he was a candidate, he laughed: "Everything." Not least how the agency's astronauts communicate via social media and how they are perceived by the public, but also how they are trained.

Like Wörner, Ongaro was also keen to point out the improvements made to the Columbus module over the years and also highlighted the spacewalk planned to repair the AMS-02 (Alpha Magnetic Spectrometer) instrument mounted on the exterior of the ISS.

"The problem is they didn't build it to be serviced."

ESA's lunar efforts are "proceeding the way it should", despite NASA pushing the first landing forward to 2024. However, he acknowledged that "the way it should" would not see astronauts bounding around on the Moon by that date.

"If NASA is pushed by politics", he added, "to get boots on the ground by 2024, that may delay the Gateway by a few years... that may divert part of their work to get that done. But even if it's that, it'd be great, because it gives an acceleration to everything else."

NASA's monster rocket, the SLS, could certainly do with some acceleration.

Though its €5.72bn budget is far smaller than NASA's, ESA finds itself receiving the same kind of criticism. Both Wörner and Ongaro bemoaned the results of a survey that found, on average, Europeans reckoned the agency cost €245 per citizen year. The actual figure is more like €10.