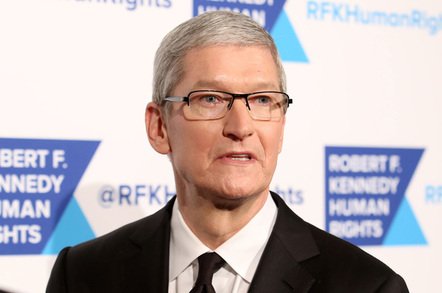 Apple has once again taken down an iOS app aimed at helping Hong Kong protesters avoid police crackdowns in the troubled city.

Apple did not respond to a request for comment on the matter, though a leaked email said to have been sent from CEO Tim Cook to Apple employees lists the iPhone maker's reasons for caving to the demands of an authoritarian regime.

"The app in question allowed for the crowdsourced reporting and mapping of police checkpoints, protest hotspots, and other information," the email reads.

"On its own, this information is benign. However, over the past several days we received credible information from the Hong Kong Cybersecurity and Technology Crime Bureau, as well as from users in Hong Kong, that the app was being used maliciously to target individual officers for violence and to victimize individuals and property where no police are present."

For what it's worth, the HKmap developers say this is not true: "There is zero evidence ... that HKmap App has been used to target and ambush police, threaten public safety [nor that] criminals have used it to victimize residents in areas where they know there is no law enforcement," the team said in a statement.

The leaked email also made no mention of the pressure applied to Apple by China, where state-backed media had accused Cook and Co. of aiding what it called "violent rioters" by allowing the app to circulate on its store.

Apple has a history of capitulating to Chinese censorship demands in exchange for access to the nation's vast market and electronics factories. Back in 2017 Cook agreed to remove VPN apps from the Chinese edition of the App Store after the government complained they were being used to circumvent its 'great firewall' network. It also removed the Taiwanese flag and references to the state (which China considers its territory) in the latest macOS build for the region.

According to its most recent quarterly report (PDF), Apple made roughly $3bn per month in revenues from China.

At least Apple will have some company in its decision to put its bottom line ahead of human rights. The National Basketball Association, which has been pursuing its own expansion into China, has muzzled its own employees after an executive with the Houston Rockets drew the ire of Beijing by posting a Tweet in support of the Hong Kong protesters.

Meanwhile games company Blizzard banned one of its top Hearthstone players after he brought up Hong Kong in an interview. Some staff at the games company, which cites "Every voice matters" as one of its core values, said the player had broken the game's code of conduct, but is staying quiet as to how exactly. ®

This story, in which @Apple has a censored an entire US news organization on behalf of authoritarians in Beijing, is waaaaay more consequential than the #NBA #FreeHongKong furor, but will get way less attention. https://t.co/ZDylRTiR45