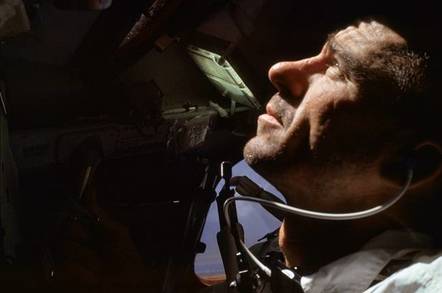 ESTEC Apollo astronauts Walt Cunningham and Rusty Schweickart spoke at ESA's 2019 ESTEC shindig in the Dutch beach town of Noordwijk over the weekend, and The Register was fortunate enough to chat with the pair.

Now 87, Cunningham's single jaunt to space was aboard Apollo 7, the first crewed flight of the programme. The 1968 mission came a mere five years after his selection and then, after heading up the Skylab branch of the astronaut office for a couple of years, "I decided that I was gonna go earn a living instead of being there at NASA."

None of the crew of the Apollo 7 mission flew in space again and the commander, Wally Schirra, was infamously prickly during the mission thanks, in part, to coming down with a cold. The pressure to succeed following the Apollo 1 disaster also weighed heavily on the crew.

Comparing the near 100 per cent coverage of communication with ground controllers enjoyed by today's astronauts, Cunningham told us 4.5 per cent was about as good as it got on his mission "and even that was an imposition on us sometimes".

Cunningham laughed when we brought up NASA's 2024 Moon goal and the concerns that the stripping away of reusability could result in the US agency's current Artemis programme turning into another Apollo rather than something more sustainable, as desired by ESA.

Hurrah for Apollo 9: It has been 50 years since 'nauts first took a Lunar Module out for a spin

The veteran astronaut explained: "What's happened over the last 50 years is we've watched various projects, some of which spend $8bn, maybe $10bn over a period of years… and then they back off."

Cunningham pinned the difficulties faced by NASA on "the public at large" not being "as enthusiastic" as they were. "That saved our life 55 years ago because it was hard for anyone to think of comparable technology. Today, that's different."

The Apollo astronaut hoped that today's push to the Moon might lead to "technology that can be used at all kinds of other places in our society" but cautioned: "I don't see how we're coming up with a much better spacecraft."

Apollo 9 astronaut Rusty Schweickart, now 83, was also concerned about NASA's lunar ambitions. "To simply go and come back and say that we've been there again is highly unsatisfactory," he said, adding that if humans do return: "We go back to the Moon to stay."

Schweickart took the first EVA from the lunar module, having ridden the second crewed Saturn V into Earth orbit. Although he suffered from motion sickness early on, he was able to clamber out onto the porch of the module (named "Spider" by the crew) and, as well as checking out the handrails and foot restraints, was able to take a few minutes to stare at the Earth from space as his crewmate fiddled with the cameras.

Though he would never fly in space again, Schweickart did go on to work on the Skylab project. He was part of the backup crew for the first mission to the stricken space station, originally planned to launch the day after the Skylab, but delayed while engineers raced to solve Skylab's issues.

Launched on the last Saturn V to fly, things did not go well for America's first space station after shielding and a solar array were torn off during launch. "By the time it got to orbit," Schweickart told us, "it was a flying disaster."

"I was the person," said Schweickart, "who, because of my EVA experience on Apollo 9, did all of the EVA development work on Skylab. So, when we ended up with a disaster in orbit that we had to rescue as it were, it was natural that a lot of that work would be done from the outside of the spacecraft."

Working at Marshall Space Flight Center, Schweickart and the team developed the procedure to put out a solar shield to protect the damaged station. "It was," he said, "an incredibly intense and ambitious programme, and four days after the launch, we were ready to launch again."

The Skylab 2 crew would eventually lift off on 25 May 1973 and successfully deploy that shield, bringing down the laboratory's interior temperature.

Schweickart recalled the frenetic activity: "There were many people who were working with me who who didn't sleep for 72 or more hours."

Indeed, even a call from then astronaut boss Deke Slayton didn't deter the repair efforts, as Schweickart recalled: "I flew over to Marshall Space Flight Centre in my T 38, got in the water tank and started working right then."

"I was partially submerged in my spacesuit, going underwater to do the simulations to figure out what we could do. And a telephone call came in from Deke Slayton."

"'The Press is coming!' explained Slayton. 'We have to get some answers to questions right now!'"

Laughing, Schweickart told us: "I said 'I don't give a damn!', handed the guys the telephone, went under water and we started getting the job done."

"But you guys," he added, referring to the media, "were the enemy."

Having long left NASA and describing himself as a "simple has-been from the past", Schweickart is now more concerned about Near Earth Objects and the "existential threat" they pose. "We can predict these impacts," he explained, "and we can prevent them from happening."

Tweaking the orbits of a civilisation-threatening asteroid was, he said, "slightly redesigning the solar system to ensure survival".

It is, he admitted, "an audacious statement to make".

But, of course, Schweickart comes from a generation of astronauts that walked on the Moon. It's fair to say he knows a thing or two about audacity. ®