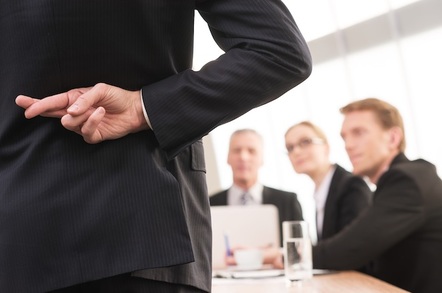 TalkTalk has been slapped down by the Advertising Standards Authority (ASA) after emailing lies to its customers as part of a hard-sell tactic for expensive fibre broadband.

In February and March this year, some customers received emails from TalkTalk saying: "We regularly look at how your broadband is performing to make sure you're getting the best service. We've noticed that, at peak times, your current broadband may no longer be giving you the capacity you need… That's why we recommend upgrading your line to fibre, which will give you 4x more than your current capacity."

Another marketing email along the same lines included the sentence: "You've hit your limit three times in 30 days," alongside a bar chart claiming to show when the recipient's broadband connection was "at capacity".

Two people who knew full well their internet usage was nowhere near TalkTalk's broadband usage cap of 40GB per month complained about these emails to the ASA, which was not impressed.

In an attempt to browbeat its own paying customers into handing over more money for expensive fibre broadband, TalkTalk told an outright lie: small print at the bottom of the email said that "at capacity" on the bar chart supposedly meant more than two thirds of the line's rated maximum. Rather than, you know, the actual maximum.

Noting how the cheap British ISP had sent these lies to "customers who had reached two-thirds of their line's bandwidth capacity twice in a 30-day period", the ASA concluded: "We had not seen evidence that the complainants had reached their data capacity, therefore because the claims had not been substantiated, we concluded the ads were misleading."

TalkTalk unsuccessfully tried to defend itself by sending ASA investigators some vague nonsense that adland's self-regulator summarised as being about "variable internet usage patterns". Apparently the ISP said that "the language used in the emails sent to the complainants did not state that their broadband was definitely insufficient for their needs".

Earlier this year the ASA banned another set of TalkTalk ads boasting how its Wi-Fi routers' signal "couldn't be beaten". Predictably enough, it could indeed be beaten.

The ISP told us: "While we're disappointed with the ruling, TalkTalk will make the required changes to any similar campaigns in future." ®