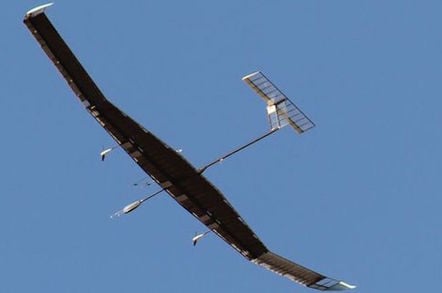 A second Airbus Zephyr high altitude pseudo-satellite (HAPS) drone, built for the UK's Ministry of Defence, has crashed in Australia while on a test flight.

The 25m-wingspan aircraft reportedly crashed after encountering turbulence, according to a local news story.

It was being flown from Wyndham, a remote airstrip in a northerly part of Western Australia that lies around 442km (275 miles) southwest of Darwin. The crash was said to have happened on 28 September during routine flying.

With the Zephyr being a noticeably light and fragile craft, northern Australia's predictable climate (hot, dry, sunny, generally calm winds) gives a much better chance of carrying out useful test flights without seeing the weather destroying the aircraft. Indeed, Airbus probably ought to be giving lessons to the British Army and Thales on weather conditions suitable for flying unmanned aircraft.

Unfortunately for Airbus, the £4.3m Zephyr surveillance drone encountered "clear turbulence" while climbing away from the airstrip which caused it to tumble out of control, as reported in depth by Flight Global.

Earlier this year another Zephyr crashed shortly after taking off for what was planned to be a month-long test flight. The electrically powered and unmanned aeroplane is designed to be able to fly for weeks on end without needing to land and refuel. Its wings are covered in solar panels, while propulsion is provided by a 300W electric motor driving wing-mounted propellers.

With a 5kg payload, as we reported back when the MoD started buying Zephyrs in 2016, the craft is intended to be used for surveillance and communications relay duties. Flying a HAPS is much cheaper than launching a satellite or renting airtime on someone else's satellite. The operating concept of "persistent surveillance" using Zephyrs means a rolling programme of flying them over areas of interest and replacing them on station every so often.

The Zephyr-S started life with British defence tech firm Qinetiq before the programme was sold to Airbus in March 2013. The aircraft are assembled at Farnborough in Hampshire. ®