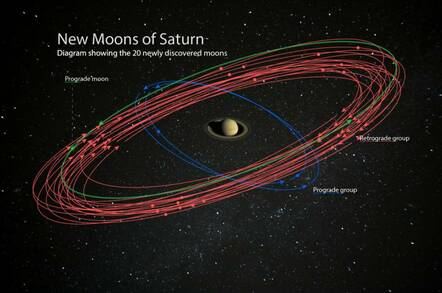 Astronomers have discovered 20 new moons orbiting Saturn, meaning the gas giant now has a total of 82 satellites, overtaking Jupiter which has 79 currently identified.

The International Astronomical Union’s Minor Planet Center, the authority on deciding official names and objects in space, announced the findings on Monday.

The latest moons are pretty small, measuring about five kilometers or three miles across. Most of them, 17 in fact, orbit in a retrograde motion - opposite to the direction of Saturn’s rotational axis. The other three are prograde, and aligned with the planet’s orbit.

The orbital periods of all 20 moons range between two to three years. Out of the three prograde satellites, two lie closer to the ringed planet and have shorter orbits. “Studying the orbits of these moons can reveal their origins, as well as information about the conditions surrounding Saturn at the time of its formation,” said Scott Sheppard, a researcher at Carnegie Science, who led the study.

The team of scientists have also tried to categorize the moons by their inclinations; they can broadly be classified into three different clusters: the Inuit, Norse, and Gallic groups. You can see why and how they travel here:

One of the prograde satellites has a tilted orbit at 36 degrees, similar to the other known inner prograde moons in the Gallic group. But the researchers aren’t certain if the new addition belongs in that group, however, since it’s located much further out. So, either it got kicked away or it isn’t really part of the same group as the other existing prograde satellites.

The outer moons are split into two groups. The retrograde ones are more closely aligned to the other satellites in the Norse group. One of the newly discovered satellites, codenamed S/2004 S24, in this group is the most distant Saturnian moon. The other two prograde objects are oriented at about 46 degrees, putting them in the Inuit group.

These inclinations suggest that the new moons could be chunks of ice and rock leftover from a larger moon that split apart in Saturn’s past, Sheppard explained to The Register.

“The outer moons of Saturn appear to cluster into three different groups in orbit space, suggesting each group was originally a much larger parent moon that got smashed apart into the smaller fragments we see today from some collision in the distant past with passing comets or other moons," he said.

"S/2004 S24 appears to be another group that may have been mostly ground to dust, and all we see today is the last surviving small fragment of S/2004 S24.”

All the latest satellites were spotted using the Subaru telescope in Hawaii. They’ve been hard to spot since they’re faint and its difficult to track and verify their orbits over time. Sheppard reckons that there are many more Saturnian moon yet to be discovered.

“We are currently only able to find moons that are a few miles in size around Saturn because the planet is so far away. We believe there are about 100 moons around Saturn bigger than one mile in size, but future larger telescopes will be needed to find these smaller, and thus fainter, moons.”

Space enthusiasts can help scientists name the new moons. The only rule is that they must be named after giants from Norse, Gallic or Inuit mythology, he said, which rules out Moony McRingface at least. ®