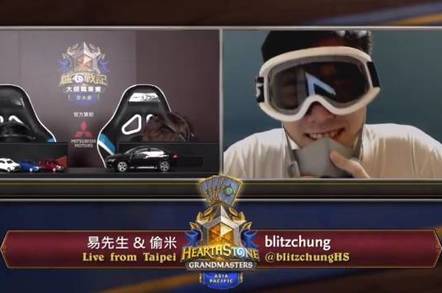 US games company Blizzard has caused a storm of protest for suspending a professional gamer after he made comments in support of pro-democracy protesters in Hong Kong.

Chung Ng Wai is one of the best players of Blizzard’s Hearthstone game, going by the name “Blitzchung,” and was interviewed having just won a match of the game at an official in-person tournament on Sunday.

At the end of the interview, Chung repeated a protest slogan “Liberate Hong Kong, revolution of our time,” from his hometown of Hong Kong where protesters are clashing with the authorities over attempts by mainland China to exert greater control over the semi-autonomous’ city.

He was also wearing goggles and a face mask – the de facto uniform of protesters thanks to the extensive use of tear gas and facial recognition technology by the police. The face mask is especially politically charged at the moment thanks to a unilateral decision in the last week by Hong Kong’s chief executive Carrie Lam to this week ban them.

In short, Chung used his game victory to make a political statement, albeit one that only lasted a few seconds, and has become a symbol of youthful defiance in his peer group. The two presenters hid their faces in response, giggled and cut to an advertising break, as you can see here.

Blizzard responded by banning him from the tournament with immediate effect, withdrawing the prize money he had already earned, and imposing a 12-month suspension on him playing any Blizzard tournaments. The two interviewers have also reportedly been fired.

It then published its decision online citing a rule violation that allows Blizzard to ban anyone who brings thems “into public disrepute, offends a portion or group of the public, or otherwise damages Blizzard image.”

We have asked Blizzard precisely which part of that rule it decided that Chung had broken, and if any representatives of the Chinese government had actually complained. We have yet to hear back.

But the harsh ruling and punishment brought immediate condemnation from the company’s own players, with many expressing surprise and anger at the decision and some saying they would stop playing the company’s games in response.

The decision was extraordinary, not just because of its swiftness and severity, but because it goes directly against gaming culture and indeed Blizzard's clearly stated “core values” – values it feels so strongly about that it had all eight of them cast in bronze and placed around a statue at its headquarters in California.

One of them is entitled “Every voice matters” and reads: “Blizzard Entertainment is what it is today because of the voices of our players and of each member of the company. Every employee is encouraged to speak up, listen, be respectful of other opinions, and embrace criticism as just another avenue for great ideas.”

Gamers are having a hard time reconciling those values with Blizzard's decision to immediately ban one of its best gamers, with no appeal, for expressing what he is passionate about and has unique enthusiasm for, and how that is respectful to other opinions.

Of course the uncomfortable reality is that Blizzard reacted so swiftly and strongly not because Blitzchung made a political statement but because who that statement was directed at: China.

With the Hong Kong protests going into their fifth month and a growing concern that China may send in troops to the semi-autonomous city to silence the youthful protest in support of democracy, the issue has become both heightened and more sensitive, especially to businesses fearful of upsetting the Chinese authorities.

Thanks to China’s centralized and authoritarian political system, a company – particularly a foreign one – can see itself cut out of the huge Chinese market in an instant if it is deemed to have upset the authorities. It is a bind that many western companies have found themselves in.

China is particularly sensitive to calls for political reform and so messages in support of Hong Kong’s protesters, in any form, could lead to economic retribution. And it is that calculus that Blizzard executives clearly considered when banning Blitzchung.

But the severity and speed of the decision has infuriated many of the company’s customers, particularly because the protesters’ causes encompass the United States’ most closely held and deeply felt ethical values: freedom of speech and democracy. Surely a gentle non-public warning about not making political statements in an interview would have sufficed?

In short, in a choice between money and morals, Blizzard came out all guns blazing for money and burned one of its own biggest supporters without a shred of remorse or regret. By doing so, not only did Blizzard preemptively do the Chinese government’s censorship work for them, but the company became an extension of the Middle Kingdom effort to silence critical voices – the complete antithesis of its core values.

No wonder gamers are hopping mad. And they are not alone – US politicians on both sides of the political spectrum were quick to criticize Blizzard.

"Blizzard shows it is willing to humiliate itself to please the Chinese Communist Party," said Senator Ron Wyden (D-OR). "No American company should censor calls for freedom to make a quick buck."

"Recognize what’s happening here. People who don’t live in #China must either self censor or face dismissal & suspensions," said Senator Mark Rubio (R-FL). "China using access to market as leverage to crush free speech globally. Implications of this will be felt long after everyone in U.S. politics today is gone."

Blizzard is not the only tech company to be sucking up to China recently. Freedom-loving Apple caught flack after if banned an app called HKmap, which showed the city's residents where to avoid riots and police actions, although the ban has since been lifted, and Apple has also blocked Hong Kong and Macao residents from using the Taiwanese flag.

Blizzard’s decision may also not make sound financial sense: China contributes less than 10 per cent of its revenue, whereas the US accounts for more than half of its money. That said, Chinese firm Tencent does own a 4 per cent stake in Blizzard.

Blizzard faces the very real prospect of a boycott in the US for its spineless actions against a revered gamer who achieved a level of skill and success that most gamers aspire to. And, unlike the NBA, there are many more games companies that people can turn to – with the tap of a button.

“While we stand by one’s right to express individual thoughts and opinions, players and other participants that elect to participate in our esports competitions must abide by the official competition rules,” Blizzard concluded its decision to came down on top of Blitzchung.

No one believes it. The question, however, is how strongly gamers feel about a blatant act of censorship and how it was carried out. We will likely find out in a month’s time when the company hosts its annual Blizzcon in California where virtual tickets are $50. Blizzard is in a storm of its own making. ®

It's 2019, and from Beijing to Blighty folk are still worried about slurp-happy apps

Developers warned not to overindulge in personal data