Learning from the competition, luring relational fans and, yes, that licence 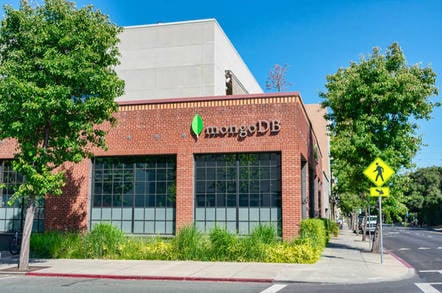 Interview A year after its controversial switch to the Server Side Public License (SSPL), and with new products livening up the summer, MongoDB remains unrepentant.

The change was aimed at making vendors selling a service using the company's code share the source of applications used to run the service as well as any tweaks. The move appeared to be aimed squarely at cloud vendors, content to "capture all the value and give nothing back to the community," as Dev Ittycheria, CEO of MongoDB, told us at the time.

Elements of the open source community were less than impressed. The Open Source Initiative (OSI) rejected the company's attempts to get the licence approved and eventually MongoDB withdrew the thing from the process, although the company continued to use it for its own products. Indeed, at MongoDB's London .Local event, where we met co-founder and CTO Eliot Horowitz, the company was trumpeting the opening up of its Compass GUI for MongoDB under the SSPL.

Months after MongoDB pulled out of the process, Kyle E. Mitchell, an independent legal specialist in licensing, posted a blog bemoaning the squandering of the opportunity presented by MongoDB's SSPL. Unsurprisingly, Horowitz agrees that the OSI missed the chance to "engage with us."

Alas, it appears the submission ship has sailed, at least as far as MongoDB is concerned: "If someone wants to submit it, so be it. But we're sort of mostly interested in making sure the SSPL is the best licence it can be, based on what our goals are."

Those goals, which Horowitz refers to as a "fundamental belief", are around open source. "Most technology, especially the core technology at the bottom of stacks, is better if it's open," he observed. "It's better for everyone involved, keeps us honest, protects them from screwing up, and they can learn it, you know, they're free to do what they want with it."

As long, of course, as all those pesky custom apps used by companies to add value get shared as well.

Going from SQL to NoSQL

The company has also sought to ease the transition for developers making the move from a relational database. Recent releases have added triggers and transactions, with Horowitz describing the latter, which can now be distributed, as like "a warm blanket; you want to know that they're there in case you need it."

The implementation of Triggers, explains Horowitz, was more of a rebranding exercise, since the functionality had been lurking in MongoDB for a while: "We can play marketing too, sometimes."

While observing that the inclusion of triggers "makes people feel comfortable", Horowitz says the implementation was quite different to the potential database destroyers with which relational data jockeys would be familiar: "It is basically pulling the transaction log from the database, and then, itself, that is then going in and doing things based on those events."

Getting developers to shift from their structured tables to MongoDB's documents continues to be a focus. Horowitz acknowledges, however, that "relational will never disappear" before likening the approach to legacy mainframe technology.

The addition of transactions and the fact that joins are possible means that Horowitz reckons "documents really will be the superset of all data models." But then he would, wouldn't he?

Learning from the competition and tipping a hat to Microsoft

MongoDB has plenty of competition these days, as great pools of unstructured data continue to make inroads into relational territory. Amazon's DocumentDB is one competitor, and Microsoft has been pouring resource into its Cosmos DB product.

For the former, MongoDB sniffily refers to it as an "imitation". And the latter? Horowitz had some kind words for Redmond, telling us that "their stance toward open source is improving rapidly" and "moving in the right direction in terms of becoming developer centric".

Microsoft is, he says, "not perfect, but they're definitely better than they were."

To be fair, for those that remember The Beast's darker days, it would have been difficult to have been much worse.

As for the future, Horowitz jokes that "we're learning a lot of what not to do from the competition".

One area the company has some way to go though is revenue generation: the top line for its second quarter of fiscal 2020 stood at $99.4m, a jump of 67 per cent when compared to a year ago. $94.2m of that came from subscriptions. Managed services, branded Atlas, hit $150m in annualised revenue and now accounts for 37 per cent of total revenue, though this is quite a jump from the 18 per cent reported a year ago. ®

We need citizen devs, cries Microsoft – but pricey new licensing plans for PowerApps might put paid to that

TV Licensing admits: We directed 25,000 people to send their bank details in the clear