Lenovo screen without fripperies but plenty of mobility 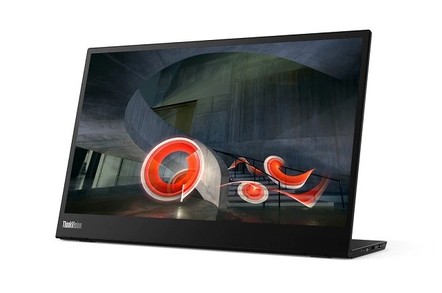 Hands On The problem with notebooks (and even those shiny new Surfaces at Microsoft's event last week) is that the screen is usually too small to be completely productive. The Register got hold of Lenovo's ThinkVision M14 to see if two screens are really better than one.

Having finally become available in the UK over summer, the ThinkVision M14 is a lightweight USB-C powered and connected 14-inch screen and... not much else. It is aimed at those frustrated with the titchy screens on modern ultrabooks and who cannot do without that extra screen real estate.

It's a common enough lament. No matter how many pixels are added and how slim bevels get, the form factor of modern laptops, and even Microsoft's new portables, does not lend itself well to working on more than one thing at once.

Of course, lugging a hulking great 17-inch laptop around everywhere isn't much good either. However, a second screen, small enough to pop into a bag, would solve all the problems – or so Lenovo hopes with the M14.

Weighing in at 570g, the M14 is unlikely to slow an owner down and the thing is certainly slim enough to slide into most laptop bags. Even with the stand folded, it is only a shade under 14mm thick. The screen itself is just over 4mm thick, although still feels relatively sturdy.

After all, you won't be poking it much – the matte screen isn't a touch panel.

The 14-inch IPS display has a middling 1,920 x 1,080 resolution and 300 nits for brightness. It won't be setting any records for gaming with a 6ms response time, but that would be missing the point.

What it does do is stand next to a laptop for those times when constant application switching becomes too much. A bundled USB-C cable is all that is needed to connect to a PC capable of pumping out video and power, or the thing has a second USB-C socket for another power source. The plasticky foldout stand also contains controls for brightness, power and a gimmicky low blue mode of operation.

That stand will tilt up to 90 degrees, and there is an additional foot stand that can be popped out to adjust things further. All ports and controls lurk on the side of the stand. A USB-C port on each side makes it easy to use the screen on the right or left of a laptop.

I've been using it for a few days now and, other than a slightly cheap feel to the plastics, I can't fault it. There were no issues in connecting it to a test laptop, in this case a Dell XPS 13, and lugging it around has not been an issue, particularly since no extra power supply is needed.

I also plugged it into a Samsung S10e, and the screen obediently came to life, first as a display for DeX and then as a mirror for Android. Powered only by the phone, leaving streaming video running on the M14 exhausted the Samsung's battery in 75 minutes. The XPS was made of sterner stuff, but ultimately, I don't think I'd want to be far from a power supply.

Which brings me to the downsides.

The lack of a battery in the stand seems an odd omission, as does leaving out touchscreen functionality. The price, at £229, is also a bit on the high side, particularly considering one can pick up a new iPad for £349 that will act either as a second screen for a Mac running Catalina or be a handy media consumption device when used solo. And a higher DPI would have been nice to see.

There is also no wireless display connectivity, such as Miracast, which is a pity.

Both Asus and Lenovo machines can be awkwardly rotated to be used in portrait mode, although while the Asus autodetects its orientation, I had to tell Windows 10 what I'd done. And those buttons on the stand made portrait usage quite tricky, which is a disappointment.

There is also no easy way to clip the thing to the top of a laptop screen which, considering how light this screen is, is a pity too.

It's also worth noting that if your pockets are deep enough, you could alternatively opt for Asus's Zenbook Pro Duo, with two screens built into the laptop chassis. It is, of course, more expensive than Lenovo's add-on.

However, if you need two screens, and want to keep the weight and size down, then you could do far worse. It's pricey, but comes with a three-year warranty, a natty case and, unlike an awful lot of costly gadgets, can genuinely improve productivity. ®