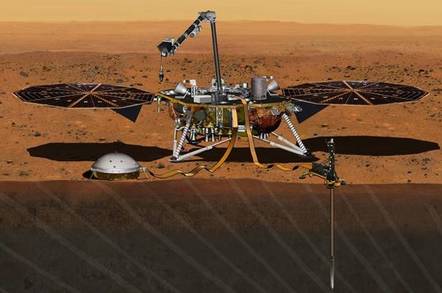 Boffins at NASA's JPL and the German Aerospace Center (DLR) have come up with a plan to save the stricken Mars InSight probe.

As a reminder, the lander's self-hammering probe, aka the mole, is a key part of the Mars lander's science payload and is designed to record the amount of heat escaping from the interior of the red planet. Named the Heat Flow and Physical Properties Package (HP3), the multi-national instrument was plucked from the deck of the lander back in February by InSight's robot arm and deposited some distance away.

The plan was to then have the thing burrow down up to five metres below the surface, pausing every 50cm to take measurements. However, it ground to a halt at the 30cm mark and would go no further.

The InSight team managed to move the support structure for the mole, using the lander's arm, in order to take a closer look. It turned out that stricken instrument was bouncing around having struck something solid. At first boffins speculated that it might be a rock, but after studying the camera footage, scientists reckon the mole has struck "duricrust".

Duricrust is cemented soil, thicker than anything previously encountered. What are the odds?

Lifting the mole and its support assembly and plonking it down somewhere else isn't really an option. The gang has therefore been poking and pushing the soil around the mole in an effort to collapse the sides of the hole and give the mole something to work with as it burrows into Mars.

Tilman Spohn, HP3's principal investigator at DLR, said "since we can't bring the soil to the mole, maybe we can bring the mole to the soil by pinning it in the hole."

The team has been using the lander's robot arm to prod the Martian soil, something the poor thing really wasn't designed for. The scoop may also be used to dump soil into the hole.

The operation is complicated by the fact that the probe is as far away from the lander as possible, meaning the arm cannot apply its full force.

InSight is approaching the first anniversary of its landing on Mars, approximately halfway through its planned mission. ®