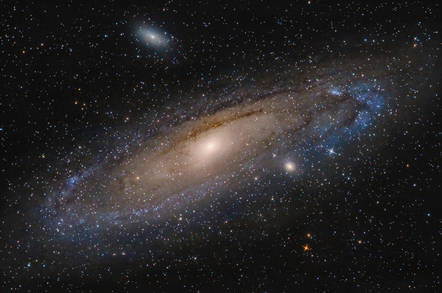 Andromeda, a massive spiral galaxy, has swallowed several galaxies within the last few billion years before setting its sights on the Milky Way.

"The Milky Way is on a collision course with Andromeda in about four billion years,” said Dougal Mackey, co-author of a new study published in Nature and a research fellow at the Australian National University. “So knowing what kind of a monster our galaxy is up against is useful in finding out the Milky Way's ultimate fate."

Andromeda will be formidable opponent from the looks of it. The researchers found that the hefty galaxy - measuring about 1.2 billion solar masses - contains two giant globular clusters of stars that are rotating perpendicular to each other. These different blobs hint at a past, where Andromeda went through two major accretion events as it sucked up new galaxies.

"Andromeda has a much bigger and more complex stellar halo than the Milky Way, which indicates that it has cannibalised many more galaxies, possibly larger ones." Mackey added.

Observations made from the wide-field camera on the Canada-France-Hawaii-Telescope showed that the globular clusters are on the same rotation axis as a plane of dwarf galaxies that orbit Andromeda.

More surprising is the discovery that the direction of the ancient feeding is the same as the bizarre 'plane of satellites', an unexpected alignment of dwarf galaxies orbiting Andromeda.

Previous research found that these galaxies could be easily ripped apart by Andromeda within a few billion years. "This deepens the mystery as the plane must be young, but it appears to be aligned with ancient feeding of dwarf galaxies,” said Geraint Lewis, co-author of the study and an astrophysics professor at the University of Sydney.

The researchers hope that by studying how these smaller dwarf galaxies integrate themselves with Andromeda’s star clusters, it will reveal how the larger spiral galaxy pulled them in and engulfed them. It could help scientists piece together what happens when Andromeda and the Milky Way finally collide with each other.

Andromeda is a good specimen to study the evolution of spiral galaxies like the Milky Way, Mackey explained. "One of our main motivations in studying astronomy is to understand our place in the Universe. A way of learning about our galaxy is to study others that are similar to it, and try to understand how these systems formed and evolved.”

"Sometimes this can actually be easier than looking at the Milky Way, because we live inside it and that can make certain types of observations quite difficult." ®