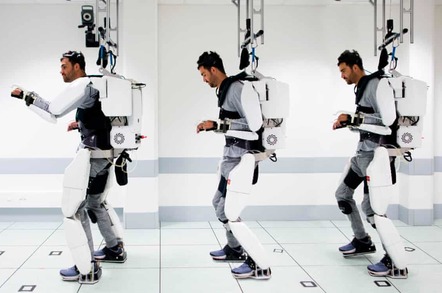 A neuroprosthetic robotic suit controlled by brain signals has allowed a paralysed man walk again for the first time, according to new research published in The Lancet Neurology.

The 28-year-old patient has tetraplegia resulting from a spinal cord injury that stops the nervous system from moving all four limbs. Doctors and physicians from Clinatec, a biomedical research lab at the University of Grenoble, France, built an exoskeleton device for the man to wear.

He also had to implant 128 electrodes covering the left and right side of the upper sensorimotor region in his brain. These monitored and recorded electrical signals as he performed various exercises, and were passed to an algorithm to decode.

The software analysed what brain signals correspond to which limb he wants to move in order to control the movement of the neuroprosthetic. It was a slow process that took over two years before the patient could walk, move his arms, reach and touch objects and rotate his wrists.

He practiced controlling the brain-machine interface three times a week via simulations and donned the real robotic suit once a week every month for 27 months. The researchers called this a ‘proof-of-concept’ and hope that their results will help them develop more sophisticated algorithms to learn how to make the robotic limbs perform more complicated tasks, like holding objects.

"This device is an important step forward in helping people with disabilities become self-sufficient,” said Alim-Louis Benabid, lead author of the paper and a neurosurgeon at the University of Grenoble. “We are extremely proud of this proof of concept and are already considering new applications to make everyday life easier for people with severe motor disabilities."

It looks like they aren’t the only ones with the same idea. Researchers at Brown University in the US are partnering up with Intel on a two-year project to study how AI could help paralyzed people walk again.

The goal is to train neural networks that can decode electrical signals emitted from people’s spinal cords so they can eventually “communicate motor commands”. Surgeons will help implant electrodes to to their injured limbs and monitor the patients as they attempt to move so that the algorithms can learn what features in a brain signal match particular movements.

“A spinal cord injury is devastating, and little is known about how remaining circuits around the injury may be leveraged to support rehabilitation and restoration of lost function,” said David Borton, an assistant professor of engineering at Brown University, who is part of the Intelligent Spine Interface project.

“Listening for the first time to the spinal circuits around the injury and then taking action in real time with Intel’s combined AI hardware and software solutions will uncover new knowledge about the spinal cord and accelerate innovation toward new therapies.” ®