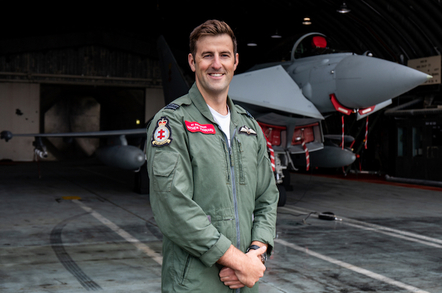 An RAF Typhoon pilot has been posted to Virgin Orbit as part of the UK government's previously declared plan to grow Blighty's space industry.

Stannard will spend three years with the new rocket launch company, gaining his Boeing 747 type rating as he joins the ranks of Virgin Orbit's own test pilots. They will be part of the team firing missiles trialling satellite rocket launches from the Cosmic Girl carrier.

The man himself said, in a canned quote: "I've flown Tornado and Typhoon fighter jets in the RAF but being involved in Virgin Orbit's space programme is a truly unique opportunity. This programme is pushing the boundaries of our understanding of space so it's a real privilege to be part of it and I'm looking forward to bringing the skills and knowledge I gain back to the RAF."

The UK is dead keen to lure Virgin Orbit and its converted Boeing 747 spacecraft launcher, Cosmic Girl, from their current US base to Newquay Airport in Cornwall (formerly RAF St Mawgan and proud owners of one of the widest runways in Britain).

After graduating from the RAF College Cranwell in 2007, Stannard flew Tornado GR.4 fighter-bombers. He later trained as an experimental test pilot with the US Navy, returning to the RAF as part of the test and evaluation unit for the Eurofighter Typhoon.

Dan Hart, chief exec of Virgin Orbit, beamed in another canned quote: "As part of Team Artemis, we've been working with the RAF and the US Air Force to demonstrate the utility of small satellites and responsive, resilient space launch and operations. We are thrilled to welcome Flt Lt Stannard to our team of hugely talented pilots, where I know his presence will move us further, faster and to new heights."

As previously reported by El Reg, Virgin Orbit aims to try its maiden launch in 2020 and will hopefully begin testing off the Cornish coast in the early part of the next decade.

The small satellite market targeted by the firm is predicted to be worth £3.9bn by 2030, with the British government hoping to capture around 10 per cent of that global market.