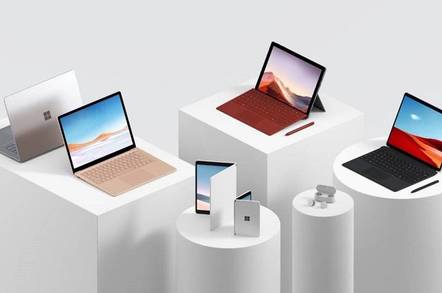 Microsoft CEO Satya Nadella, speaking before the launch of new Surface devices in New York, told glossy tech rag Wired the operating system is "no longer the most important layer for us".

"What is most important for us," he continued, "is the app model and the experience. How people are going to write apps for Duo and Neo will have a lot more to do with each other than just writing a Windows app or an Android app, because it's going to be about the Microsoft graph."

Nadella's remarks speak volumes about Microsoft's current approach, as demonstrated in the variety of operating systems featured in the Surface models launched and previewed at the event.

The Surface Pro X, however, runs Windows 10 on Arm. The CPU is Microsoft's SQ1 with an Adreno 685 GPU – based on Qualcomm's Snapdragon 8CX. Windows 10 on Arm runs either applications compiled for Arm, or Win32 binaries provided they are 32-bit, but with some compatibility issues.

On stage in New York, Adobe demonstrated its Fresco application to show off the new slim Surface pen, but added in passing that the company will be bringing more of the Creative Cloud applications to the platform as it can – an acknowledgement that some porting effort is required. Intel, for obvious reasons, is keen to highlight compatibility issues.

The forthcoming Surface Neo runs Windows 10X, a new version of Windows running on Intel hardware and optimised for dual screens but also focused on Microsoft's Universal Windows Platform (UWP) so that classic desktop applications run only via container technology. Full details of Windows 10X are yet to be revealed, but some compatibility issues are inevitable.

The Surface Duo phone, which like the Neo is not expected to be released until towards the end of 2020, runs Android, dashing hopes of enthusiasts anticipating a Windows-based Surface phone. The company did the engineering work to get Windows 10 working on phones, but under Nadella concluded that it would never win the application support required to succeed.

Nadella is focused on Office 365, Azure and cloud services, which has so far delivered strong growth. Microsoft is also now deeply invested in Linux, with huge use of the operating system on Azure and the remarkable Windows Subsystem for Linux baked into Windows 10.

Diverse operating systems in the Surface lineup should not then come as a surprise. There are caveats, though. Nadella can talk about writing apps for "the Microsoft graph", but developers still have to write code that runs successfully, and offering multiple operating systems complicates that task. The messaging is mixed: on the one hand the company invites devs to write UWP apps, to get the most from Windows 10X and the modern Windows user interface, while on the other hand pushes them towards cross-platform solutions like Progressive Web Applications (PWAs) or, for .NET developers, the Xamarin framework, which targets UWP, iOS, Android and Mac.

It is also worth recalling that Microsoft itself grew its business by first dominating the standalone or client PC operating system, and using that as a lever to move businesses towards Windows Server, SQL Server and more.

The world is different now, but we still see how Google and Apple are able to use their mobile operating systems to extend into new areas like payments and personal assistants, as well as pushing users towards their own cloud ecosystems. The Surface Duo will be interesting in this respect, with Microsoft pre-configuring it for its Office 365 ecosystem, but users still having to sign into Google to get access to the Play store.

Nadella is right that the operating system is "no longer the most important layer", but it still matters, and the diversity in the Surface lineup will not help persuade developers to write applications that make the most of the new hardware. ®