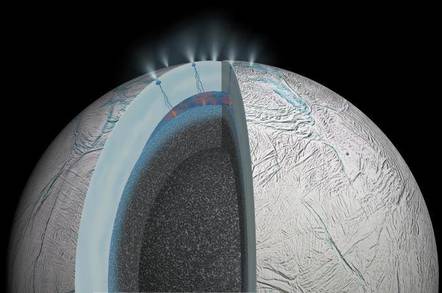 Hydrothermal vents on Enceladus, one of Saturn’s moons, are blasting out organic compounds that could provide the right ingredients to make amino acids, the building blocks of life as we know it.

Amino acids, considered an essential for life, are used to form proteins in all known living organisms. They contain carbon, oxygen, hydrogen, and nitrogen - these elements have all been found in the compounds detected on Enceladus, according to a paper published in the Monthly Notices of the Royal Astronomical Society on Wednesday.

Data from the Ion and Neutral Mass Spectrometer onboard NASA’s now-defunct Cassini spacecraft found “low-mass organic compounds in the Enceladean ice grains: nitrogen-bearing, oxygen-bearing, and aromatic.” The ice grains were spewed from the hydrothermal vents on the Moon’s ocean floor.

The plumes of water vapour and ice burst through the cracks of its icy surface and fly off into space, allowing spacecraft like Cassini to sniff out their chemical composition. On Earth, hydrothermal vents provide heat and energy to kickstart chemical reactions to produce amino acids.

"If the conditions are right, these molecules coming from the deep ocean of Enceladus could be on the same reaction pathway as we see here on Earth,” said Nozair Khawaja, lead author of the paper and a researcher at the Free University of Berlin, Germany. “We don't yet know if amino acids are needed for life beyond Earth, but finding the molecules that form amino acids is an important piece of the puzzle.”

The organic compounds are first dissolved in Enceladus’ ocean. Next, they’re vapourised in the hydrothermal plumes before finally condensing and freezing when they come into contact with the Moon’s icy surface.

It’s not the first time that organic compounds have been discovered on Saturn’s sixth largest moon. The researchers also found heftier, insoluble organic molecules that they reckon float on the surface of Enceladus’ ocean.

The compounds in the amine and carbonyl chemical groups are smaller and soluble and could be “ideal precursors for...biologically relevant organic compounds in the warm depths of Enceladus’ ocean,” according to the paper.

"This work shows that Enceladus' ocean has reactive building blocks in abundance, and it's another green light in the investigation of the habitability of Enceladus," Frank Postberg, co-author of the paper and a professor of planetary sciences at the Free University of Berlin, added. ®