We had a tinkle on the virtual ivories 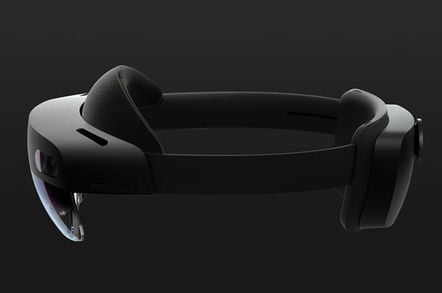 Future Decoded The Register got its claws on both the recently released Surface Hub 2S and the still-waiting-in-the-wings HoloLens 2 at Microsoft's Future Decoded event. The question is, are the pricey collaborative gizmos any good?

Announced earlier this year but still not generally available, the HoloLens 2 is a tad more production-ready than its predecessor, which had the feel of a prototype about it.

The HoloLens is Microsoft's take on mixed reality, with the user wearing a headset, replete with a visor onto which imagery is projected. The result is "holograms" floating in the user's field of view, which can be objects or the tech's version of Windows-style dialogs.

The headline enhancement in version 2 is the field of view, which has been increased considerably from the first version (which was akin to peering through an invisible letterbox).

We had a play, and while things were markedly better vertically, the visuals were still a little iffy horizontally, requiring a turn of the head to bring images into view.

The gang has also improved the tracking which, like the original HoloLens, is handled by Kinect-derived sensors in the headset. Tracking will now go down to the finger level and, in a piano playing demonstration, worked well for us.

We'd have to say that while this implementation does not match the accuracy of a glove, such as the one we looked at from Manus VR, the convenience is undeniable and a huge step up from the previous generation, particularly when reaching out to grab, resize and move holograms.

However, while The Reg got excited about the visuals and tracking, customers have other interests. Miquel Vidal Trilla of CBRE told us that the number-one issue his users had with HoloLens 1 was actually logging on. Rather than a lengthy faff with a virtual keyboard, the second-generation unit allows an iris scan and a Windows Hello login.

The eye-tracking also means text in holographic windows can be scrolled, which is pretty much essential for viewing a guide hands-free during a remote assistance session.

Finally, Vidal pointed to the new weight distribution of the headset, which now sits comfortably on the user's head, unlike its front-heavy ancestor.

Overall, its an impressive, if pricey ($3,500), device, although Vidal remarked that while a consumer might wince, for his engineers it was just another tool. Which, with its focus on enterprise and services, will be music to Microsoft's corporate ear... once the company finally manages to ship the thing, that is.

Microsoft's eye-wateringly expensive Surface Hubs have carved themselves out a niche in the corporate world, at least for those who have gone full Office 365.

The follow-up, the Surface Hub 2S, arrived in the UK recently, and we were keen to give the thing a prod. A more exciting version, the X, which will allow easier screen rotation and the snapping together of multiple screens, will appear at some point in 2020. An exact shipping date was not available, and while the S hardware can be upgraded without replacing the screen, no price has been set for the switcheroo.

Of course, playing games or doing anything 3D graphics-heavy is not the aim. A customised Windows 10 shell aimed at finger-happy users running Microsoft Store apps is what the experience is all about – and, of course, Teams.

Microsoft's Slack-for-suits is front and centre as the company pitches the device fairly and squarely at collaboration. Shared whiteboards, video and audio conferencing, document sharing and mark-up all work well. And yes, Skype for Business is there too.

A chunky whiteboard-esque marker is attached to the side of the screen for sketching and, compared to the previous model, the bevels surrounding the display are slim, making the device a little less obtrusive in the meeting rooms for which it is intended. It can also be wheeled around on its stand. After all, equipping every room with its own Surface Hub could raise a bean-counter eyebrow or two.

Overall, we came away impressed with the new Surface Hub. It is, however, not the only game in town. Google, as an example, has its own take on collaboration, Jamboard, while Cisco has its Webex (Spark) Board. But a company that has bought into the vision of Teams may find its big-screen extension hard to resist, with the sweetener of an upgrade path to the next new and shiny – provided it has some deep pockets. ®