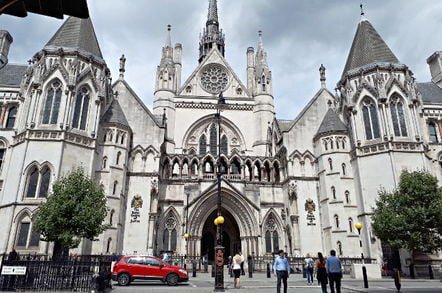 Google has lost its attempt to squash a High Court lawsuit that could see the firm stung for £3bn over its exploitation of a loophole in Apple's Safari browser.

The Court of Appeal, sitting at London's Royal Courts of Justice this morning (PDF), upheld former Which? director Richard Lloyd's attempt to start a not-quite-class-action sueball rolling in Google's direction.

"This case," said Sir Geoffrey Vos, chancellor of the High Court and also a Court of Appeal judge, "seeks to call Google to account for its allegedly wholesale and deliberate misuse of personal data without consent, undertaken with a view to commercial profit."

Back in 2018, the High Court threw out Lloyd's lawsuit because the £1.5-£3bn he is claiming on behalf of a representative "class" of people was more likely to go to lawyers and the venture capital fund backing Lloyd, rather than the people actually affected by the Safari Workaround devised by Google.

Mr Justice Warby, the first judge, noted that Google's alleged role "in the collection, collation, and use of data obtained via the Safari Workaround was wrongful, and a breach of duty." However, he dismissed the suit anyway, refusing Lloyd permission to start it in London instead of in an American court with jurisdiction over Google. In addition to that, he also said that Lloyd's "representative class" of people didn't all have the same legal interest in the case, something the Court of Appeal has now reversed.

"The represented class," ruled Sir Geoffrey, "are all victims of the same alleged wrong, and have all sustained the same loss, namely loss of control over their BGI [browser-generated information]." BGI is the personal data at the heart of the case, which will proceed to a full trial at some point next year.

During legal arguments at a Court of Appeal hearing earlier this year, Vos was rather sceptical of Google's case, as we reported at the time.

Lloyd, who heads up a campaign group called "Google You Owe Us", is effectively re-running an old legal case from the start of the decade. Called Vidal-Hall v Google, that case hinged on the so-called Safari Workaround.

Back in the mists of time (well, 2010-11), the Safari browser's maker, Apple, set it to block ad-tracking cookies by default. This displeased ad giant Google, for obvious reasons, which wanted to snuff out the default blocking so it could track Safari users and beam ads at them, thus earning money from advertisers.

Happily for Google (and unhappily for Apple fanatics) its techies found a way of bypassing the blocking: hence the Safari Workaround was born. That allowed Google to plant tracking cookies on iOS devices without the user's knowledge or consent. As we reported last year about a US judgment in Safari Workaround-related litigation, Google has since spent tens of hours' worth of profits to make people complaining about this shut up and go away.

Happy with that, says Lloyd

Speaking to The Register after judgment was handed down, Lloyd himself said the judgment was a "hugely important step" that "changed the law" and would let "large numbers of consumers have redress" for the apparent misuse of their personal data.

"Google tried to stop this happening in the English courts," he told us, adding that the judgment "fired a warning shot at big tech firms that they can't break the law; I'd expect more data controllers to be more careful."

The judges refused Google permission to appeal against today's judgment, but the ad tech firm has the option of asking the Supreme Court. ®