Teamwork, collaboration and not a lot of Windows 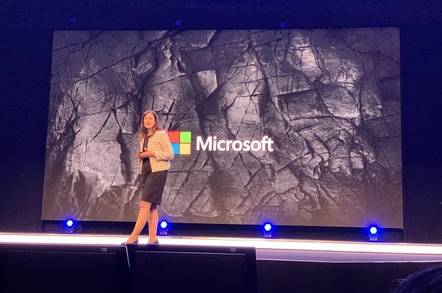 Future Decoded The future is AI, if Microsoft is to be believed.

Microsoft UK CEO Cindy Rose wheeled out a succession of speakers on the topic at the company's Future Decoded shindig in London this week, with everyone from banking representatives to ocean researchers and the NHS on hand to extol the tech's virtues.

A warning was issued to the effect that organisations needed to be open on how the silicon smarts were being deployed in order to get user buy-in.

A report commissioned by Microsoft cautioned that the UK risked losing out to competitors like the US and China, and potentially billions of dollars, if leaders failed to introduce machine learning into their business models.

Seventy-four per cent of business leaders surveyed didn't think the UK had the right structures in place "to fully capitalise on its standing as a leader in AI". The report, however, continued with the statement that companies using AI are outperforming those that are not by 11.5 per cent, up from 5 per cent a year ago.

It's an odd statement without more context. A bit like saying "companies that give employees free biscuits are outperforming those that don't."

The report, which surveyed 1,000 business leaders, found 56 per cent of companies were using AI "to some degree" – anyone who has been on the receiving end of a chatbot can attest to its growth. However, 83 per cent of business leaders claimed to have not been asked by staff about AI, which sits awkwardly with that 56 per cent figure.

Getting employees involved and, more importantly, getting an AI strategy in place, is therefore key. That is: once companies understand what exactly AI is.

Certainly, the UK government could use some help from Microsoft, Google and the rest of the AI-promoting world.

In a speech to the UN last week, embattled UK prime minister Boris Johnson made some fascinating statements about the tech, telling his audience: "AI. What will it mean? Helpful robots washing and caring for an ageing population or pink-eyed Terminators sent back from the future to cull the human race?"

Not quite the image that Microsoft had in mind in its "tech for good" presentations.

And we'll draw a veil across Johnson's scaremongering over "terrifying limbless chickens" or nightmare-monitoring mattresses.

However, the final keynote of the first day was perhaps the most memorable. Unusually for an end-of-day session, the hall was packed with attendees looking forward to seeing astronauts Helen Sharman and Tim Peake take to the stage and somehow connect the experiences of their respective missions to space with Microsoft's AI and collaboration tools.

Sharman, the first Brit in orbit, is approaching the 30th anniversary of her jaunt to the Mir space station. Describing her selection, training and subsequent flight to the then relatively new outpost, Microsoft would have been delighted to hear the words "Teamwork" and "Team" crop up time and time again as it sought to demonstrate to attendees just how fabulous its collaboration toolset is.

Peake, on the other hand, only managed to squeeze in a couple of mentions of "Teamwork" before doubtless eliciting a quiet groan from Microsoft's public relations team, but the biggest laugh of the day from the audience, by once again blaming the company's spreadsheet for his infamous wrong number dialled from space.

"I'm still blaming that on the software, I imported my contacts address book in Excel and all the 9s got rounded up to 0s…"

Still, he redeemed himself by managing to crowbar AI into his on-stage chat, highlighting the creepy floating robot head, CIMON (Crew Interactive Mobile Companion), which memorably had a bit of a sulk before sinking into passive aggressive mode after a shaking from astronaut Alexander Gerst aboard the International Space Station.

Peake then brightly compared the 'bot, a "robot helper", to HAL, the murderous AI from the film 2001. Again, possibly not the message about AI that the Windows giant would have liked.

Peake did, however, go on to make some excellent points concerning the uses of AI in space exploration.

Robotic rovers on Mars and missions beyond Earth orbit, where autonomy is needed or crew workload can be reduced, "is where artificial has a real role to play", Peake said, before neatly rounding back to the keynote at the start of the day by telling the audience: "We need to start building up the trust in AI so that we can work together."

Hopefully for Microsoft, the teamwork, collaboration and AI points made by its space-travelling guests won't have been lost on an audience clearly enthralled by the duo's achievements. ®