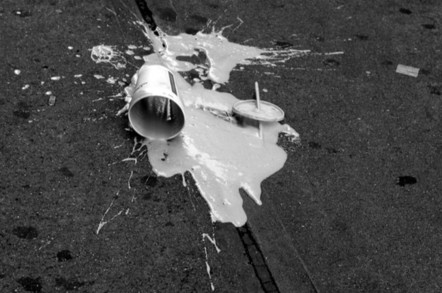 Heart-attack-in-a-bun purveyor Burger King has been given a stern talking to by the UK's Advertising Standards Authority (ASA) for supposedly encouraging antisocial behaviour.

Cast your minds back to the European election trail of May 2019, when a clutch of angry Brits decided that throwing milkshakes at politicians would be a good way of making them look rather silly.

As Farage's campaign arrived in the Scottish capital of Edinburgh, which you can imagine was received about as well as a turd in a hot tub, police asked a McDonald's branch near the rally to kindly stop selling the frothy diabetes-baiting treat for the duration.

Now, since every corporate social media presence has sat a teenager at the keyboard to appear to be down with the younglings, arch-nemesis Burger King saw a golden PR opportunity, tweeting:

As if the PFY suddenly realised they could be opening a can of regulatory whoopass here, a follow-up tweet dug Burger King a deeper hole:

The ad prompted 24 complaints on the grounds that it was "irresponsible and offensive because they believed it encouraged violence and anti-social behaviour", the ASA said.

The watchdog upheld the complaints, saying: "Although we acknowledged that the tweet may have been intended as a humorous response to the suspension of milkshake sales by the advertiser's competitor, in the context in which it appeared we considered it would be understood as suggesting that Burger King milkshakes could be used instead by people to 'milkshake' Nigel Farage. We considered the ad therefore condoned the previous anti-social behaviour and encouraged further instances. We therefore concluded that the ad was irresponsible."

The ad must not appear again in its current form, which is handy since it was a particularly time-sensitive jibe, and Burger King has been told "to ensure that its future marketing communications did not condone or encourage anti-social behaviour".

Throwing things at politicians has a rich and cultured history. Arnie, Ed Miliband, John Prescott, Bill Clinton, Farage and many, many more have all been egged. Sarah Palin has faced a volley of tomatoes and George Dubya famously Matrix-dodged a flying shoe. According to Roman historian Suetonius, Vespasian was once pelted with turnips. Long may it continue. ®

Burger barn put cloud on IT menu, burned out its developers