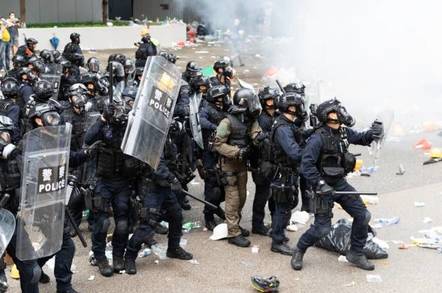 Updated Apple has banned an app that allows people in Hong Kong to keep track of protests and police activity in the city state, claiming such information is illegal.

“Your app contains content - or facilitates, enables, and encourages an activity - that is not legal ... specifically, the app allowed users to evade law enforcement," the American tech giant told makers of the HKmap Live on Tuesday before pulling it.

The makers, and many others, have taken exception to that argument, by pointing out that the app only allows people to note locations - as many countless thousands of other apps do - and so under the same logic, apps such as driving app Waze should also be banned.

That argument is obtuse of course given that the sole purpose of HKmap Live is to track police activity on the streets of Hong Kong and not to help people navigate to other locations. For example, at the time of writing – 0300 Hong Kong time – there are only a few messages live but they are clearly intended to provide ongoing intelligence on police movements.

“After the tear gas was applied, the police officer immediately returned to the police station,” reads one. “Four flashing lights parked at the police station door,” says another. Another simply reads: “Riot.” It is extremely easy to see at a glance where police activity is concentrated given the combination of messages and precise GPS locations.

But local Hong Kong citizens have highlighted a quirk of local laws that provide a strong counter-argument: under the law, the Hong Kong police are obliged to wave a blue flag at the spot in which they wish to declare that an illegal gathering is taking place.

The intent is to give citizens sufficient notice and time to move away from the area before any police action is taken. The HKmap Live app simply takes that official approach and extends it to citizens, allowing them to notify others of action that will be taken in specific locations.

It is far from clear whether Apple has undertaken that kind of legal review, or whether it is choosing to follow local law or US law in declaring the app illegal. Apple has also, so far, refused to say whether it took the decision to ban the app in response to a request from the Chinese authorities, but in the past has show a remarkable willingness to kowtow to Middle Kingdom mandarins.

Regardless, the ban has left a bad taste in the mouths of many, given the background to events in Hong Kong, especially the recent shooting of a protester at point-blank range with live ammunition by a police officer.

Apple has made defense of citizens’ rights a key differentiator in its technology and painted itself as a business that will stand up to unreasonable requests by the authorities who wish to use its technology to bypass current laws - in the US at least. That Cupertino chose to ban the app without discussing the issue with the app’s developers and has given a very limited, and quite possibly incorrect, explanation as to why, has infuriated many.

In a follow-up to its announcement that Apple has banned its app, the makers said they were optimistic that the issue could still be resolved in their favor. “To make it clear, I still believe this is more a bureaucratic f up than censorship,” said one on Twitter. “Everything can be used for illegal purpose on the wrong hand. Our App is for info, and we do not encourage illegal activity.”

Given escalating tensions in Hong Kong and growing levels of violence, particularly this week’s use of live ammunition by the police, there is an additional reason to question Apple’s decision: many Hong Kong citizens claim they had started using the app in order to carry out their legal right to protest while at the same time avoiding dangerous hotspots of violence.

“Apple assume our users are lawbreakers and therefore evading law enforcement, which is clearly not the case,” the makers complained.

The situation itself in Hong Kong is growing increasingly worrying. Protests are now in their fifth month, with neither side seemingly willing to back down. The Chinese government is determined to clamp down on the unrest in its semi-autonomous province but so far has been careful not to intervene militarily, out of fear it could result in the world turning its back on the country, as it did following the Tiananmen Square massacre in 1989.

The protesters in the meantime are furious at China’s growing influence over the province. The protests began when the Hong Kong legislature proposed a new bill that would make it easier to extradite people to China from the city. But they then exploded when the legislature refused to withdraw the bill and instead used harsh police tactics in an effort to stamp out the protests; a tactic that backfired drastically.

In that sense, some Hong Kongers feel they are fighting for their very right to exist autonomously from the Chinese mainland; while China is increasingly unhappy at what it sees as a questioning of its authority. The lengthy and often violent stand-off has encompassed all facets of life in the famous city, from a storming of its international airport to business leaders being pressured to lend their support to Beijing.

The protesters have five broad demands that must be met before they say they will step down: the withdrawal of the extradition bill, which has happened; legislature leader Carrie Lam to step down, which Beijing is very resistant to; an inquiry into police brutality; those who have been arrested to be released; and – perhaps the hardest hurdle – greater democratic freedoms.

It is unclear whether China will ultimately find a way to accept those demands and defuse the tension or whether it will decide to try to impose its will forcibly. In the meantime, protests continues and there are daily clashes between protesters and police.

While Apple, for obvious reasons, will not want to take any part in all this, its decision to ban an app that could make the lives of Hong Kong citizens safer and perhaps even support the authorities by calling it illegal does put the company in a position of taking sides.

If there is any good news, it’s that the HKmap Live service is also available on the Web so it isn’t reliant on a iPhone app and Apple users in Hong Kong will still be able to access the service for as long as it stays live. ®

Apple now appears to have rescinded the decision to ban the HKmap app, according to its developers.

Thanks everyone, @Apple finally made the right decision. Will update later as things are going crazy in #HK now. pic.twitter.com/PsnNry0V21