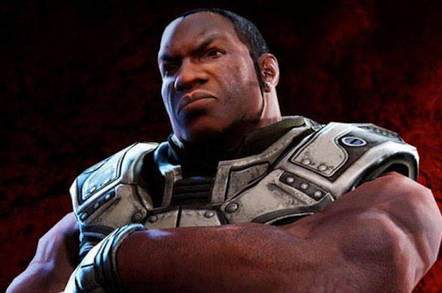 Gears of War's Augustus "Cole Train" Cole is not Lenwood "Hard Rock" Hamilton, according to a Pennsylvania federal court.

Hamilton, the former (American) football player and professional wrestler had lobbed a sueball at the makers of Gears of War alleging his likeness had cropped up in the third-person shooter.

The crux of the case was an alleged resemblance between the wrestling persona Hamilton created in the 1990s, "Hard Rock Hamilton", and the Augustus Cole character in the game series (also referred to as "Cole Train").

In a memorandum (PDF) indicating that someone has been playing an awful lot of Gears, a 1998 meeting between Lester Speight (a wrestler known "Rasta the Voodoo Man") and Hamilton was described where Speight discussed plans with Hamilton for a violent video game.

Family-friendly Hamilton was not interested, and Speight went on to voice the Cole character.

Hamilton may have shot himself in the foot somewhat when, while asserting the Cole character shared his likeness, he described the fictional weapon wielder as "totally the opposite" of his own personality. He went on:

For [Defendants] to take my likeness and... portray me as a person that shoots people, curses their mom out, and cusses like [the Cole character] does, that's not portraying Hard Rock Hamilton. That ain't me. I was highly mad, and still am. That ain't me.... that's not my temper. That's not my attitude... But as far as being vulgar, disrespectful to women, disrespectful to anything. [The Cole character] stands for totally the opposite of what I was trying to do...

The Gears of War franchise has, of course, been hugely successful.

Sadly for Hamilton, the memorandum remarked that Cole wasn't a wrestler and while there were some "broad similarities" in appearance, things were sufficiently different to satisfy the Transformative Use standard. Even skins for the character, such as "Superstar Cole" or "Thrashball Cole", were deemed OK.

That said, Gears of War is not above making use of the odd celeb here and there. Actress Linda Hamilton is due to put in an appearance as Sarah Connor as part of a tie-in with the upcoming Terminator: Dark Fate film.

With Microsoft Studios, Lester Speight and the other defendants granted a motion for summary judgement, we can't help but wonder if there is scope for a few more tie-ins with the wrestling incarnations of tech world supremos.

Maybe Satya "The Soporific Keynote Speaker" Nadella versus Tim "Still Not Steve" Cook? Or Larry "Licence To Thrill" Ellison up against Ginni "The Axe" Rometty? ®